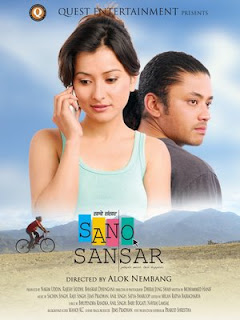 Sano Sansar has been around for a while but I watched it recently. My review is tentative as I am not a connoisseur of Nepali films. What was notable from the beginning was the clarity of the HD film. No more grainy lines and blurs and once I got over that I enjoyed the scenic film unrolling before my eyes. Typical boy meets girl cyber style, they hate each other, mishaps, misunderstandings, take time discovering their love interrupted by sub-plots from the sidelines and the happy ending to top it all . This may seem like a familiar story-line but the novelty of the simple dialogues (as opposed to purano nepali film dialogues that are shuddha nepali but unrealistic and un-relatable), the light hearted settings and the pretty faces does impress.

Shakya’s narration from the beginning gives a personal touch, his voice soothing, his language simple and identifiable to us the viewers drawing our interest. Some scenes were very original such as when Shakya takes a tumble in his all important graduation day- for some reason I went berserk with laughter but I presume this was because of the excessive adrenalin and optimism running through my veins as I watched the scene, but it was also refreshing as it was a simple statement. I have watched timelessly nepali films trying to desperately create a comical situation and cringed and cringed some more, but this was effortless. The English in the film is also well-spoken, this may not be a big deal as it is a Nepali film but it indicates attention to detail.

The realism is maintained in the script by Neer Shah as the ‘chief police’ of sorts tries to blackmail and exploit our already troubled hero Shakya into spying on and tracking his daughter Namrata. The twisted logic he uses though doesn’t work and the plot line surrounding him is frayed at the edges. But in walks Vinay Shrestha as a suave, sardonic and slightly perverse individual he plays the character well. He tries to get back with Namrata after his sexual advances were rejected but as he repeats his action she ends up seeing him for who he is and picks the good guy, our hero Shakya who actually does understand her.The Sano Sansar title song is raw, husky and beautiful. Other numbers like ‘musuka hasda’ and ‘maya yo’ are well choreographed. Without the garish costumes and make up, simple yet relatable concept, Sano Sansar is a film that has opened new doors in the Nepali Film Industry. It’s different, it’s the future.

Lex Limbuhttps://lexlimbu.com
Lex Limbu is a non-resident Nepali blogger based in the UK. YouTube videos is where he started initially followed by blogging. Join him on Facebook and follow him on Twitter.
Previous articleTGIF – Navyaata Magazine
Next articleNepali Names Daughter After Messi