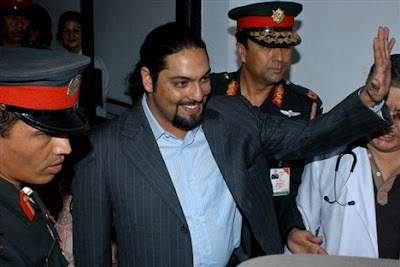 Former Crown Prince Paras was at Tiger Tops Jungle Lodge(Chitwan) with his family when he was engaged in a verbal scuffle between Rubel Chaudhary on Saturday evening, the son-in-law of Deputy PM Sujata Koirala. Now no one really knows what happened like most Nepali news – but its believed that Paras persistently conversed with Rubel about the political situation and blamed the Koiralas for the removal of monarchy in the country.
It is said that when Paras was insulted by Rubel, he whipped out a gun and threatened to open fire. After this incident the Chaudhary couple was advised to return to their room whilst Paras sat drinking. The couple left the next morning and Paras and family are believed to be in Fulbari Resort in Pokhara. The updated news is that Paras had not obtained a license to carry fire-arms from Kathmandu therefore he has broken the law. Deputy PM Koirala has vowed to take stern actions against Prince Paras after her return from abroad.
READ THE FULL LOWNDOWN HERE!!
READ THE STATEMENT FROM RUBEL CHAUDHARY!!