NEWS DEVELOPING: JPR Events who brought Bryan Adams over to Nepal will be bringing over the Indian singing sensation Kailash Kher to Nepal for a Nepali New Years Eve Performance taking place at Hotel Soaltee Crowne Plaza where Nepali band Abhaya and the Steam Injunes will open the show; this has been confirmed by Samden Sherpa (event organiser). Those who attended the press meet on the 22nd March got to hear the live confirmation from Kailash Kher himself through a video call. The musical evening will be followed by a fashion show. I did hear that various Miss India’s and Bollywood actress Jacqueline Fernandez will also arrive in Nepal soon to launch a jewellery line however there havent been any confirmation regarding that news.
Regarding the ‘Shah Rukh Khan and Priyanka Chopra in Nepal’ rumours; well Sherpa stated it will happen as part of the Temptations Reloaded tour that will take place in May.

“It has been principally agreed upon; Khan’s agent will be giving the date in seven days,” he informed.

Read The Himalayan Times for more


For now enjoy this video of a boy in Nepal singing Saiyaa – the video had surfaced a long time ago. 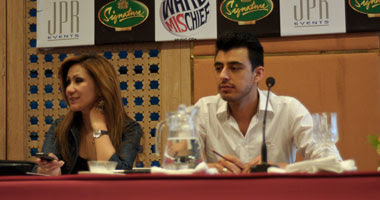 Picture of Abhaya Subba and JPR Event Organiser at the Press Meet. – MyRepublica