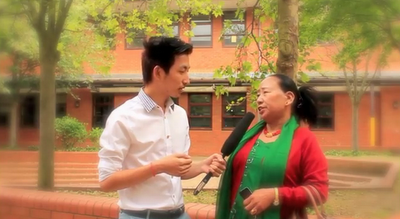 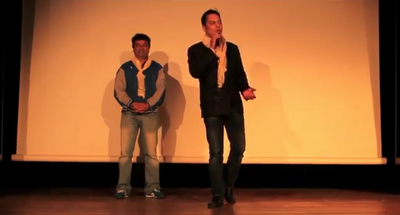 Samaya Entertainment Ltd organised the screening of Nepali film Miss U in Feltham, London on Saturday 2nd June at the Feltham Community College. The event was attended by producer and actor of the film Dilip Rayamajhi and Meri Bassai’s Surendra KC. The event was supported by the Nepalese Community of Hounslow. Check out the two videos above; the first one talks more about peoples views on Nepali Cinema and the latter is a compilation of feedback of the film from viewers.

My thoughts on Miss U

I tend to watch a lot of Nepali films… not only those that star the recent batch of actors such as Karma and Vinay Shrestha but even movies of Rekha Thapa and Biraj Bhatta. It is only by watching the diverse range that one can appreciate the new changes being brought about in the current growth of Nepali Cinema. Having been told by many to MISS watching Miss U, I was really curious to see what exactly the movie offered. I wasn’t expecting anything spectacular. Even if it’s just another love story… entertain me for two hours; I’ll be fine. Now where do I start. Even being a fan of Namrata Shrestha couldn’t save the movie. Cheesy and very corny dialogues, especially the part where Varun Jb Rana delivers the “Hey Aashu, Jasmine ko akha bata kina jharches” line… Yes dear readers, he’s talking to Namrata’s drop of tear. Awkward. As someone laughed and said at the screening, yo film ta music video jastaii raicha. I too felt like there were too many unneeded songs and backing track. My favourite part of the film was watching the Hamro Sambhandha video and I’d like to thank the lyricist, singers and music composer for that. Malaysia looks nice in the film but that’s not enough, honestly. It event gets boring after some point. A lot of the film just revolves around the beach and the bedroom. If the film was cut down to 80 minutes maybe my thoughts and feelings would be a bit more receiving. I can understand why Namrata Shrestha and Varun Jb Rana completely disappeared during the promotional activities of the film. I hope Namrata really delivers and firmly confirms her label as an actress with her upcoming movies.

PS. If you think my few words are harsh then please do view the movie and decide yourselves.
#PS. My hair was super crazy that day. Half of its gone now. Relief.


Join Lex on Facebook!
Read More:
MISS U – Nepali Film in London
Miss U – Another Nepali Film
Namrata’s Next Movie – Miss U
Miss U Released in Nepal