The World’s 100 Most Powerful Women list by Forbes magazine has the Nepali president Bidya Devi Bhandari at number 52! The most powerful woman according to Forbes is the chancellor of Germany Angela Merkel followed by American politician and presidential candidate of the US Hillary Clinton.

Bidya Devi Bhandari is the first Nepali woman president. She created headlines globally and sparked a huge discussion during the time back in October 2015. The description by Forbes mentions of her close rapport and possible influence over the current prime minister KP Sharma Oli. 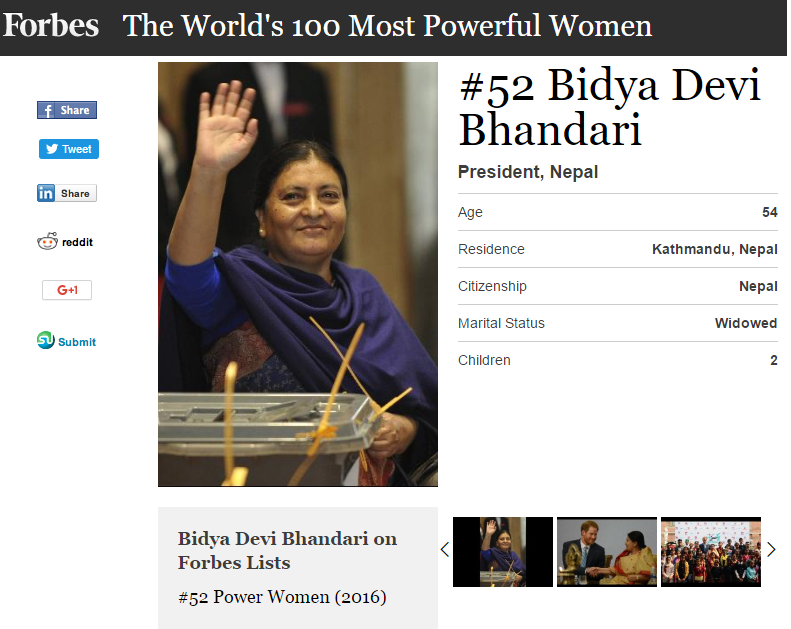 What Forbes says “Bidya Devi Bhandari became Nepal’s first woman president in October 2015. Although the role is considered to be ceremonial, Bhandari, a longtime politician, has the ear of Prime Minister K.P. Sharma Oli, and therefore could potentially have greater influence in national policies and decision-making. The April 2015 earthquake in Nepal not only claimed lives but also destroyed infrastructure, and there is much work ahead to rebuild. But efforts to do so have practically come to a standstill amidst resistance from Madhesi and other ethnic groups, who are angered by a new constitution they say limits their rights. Amidst these tensions, in May Bhandari cancelled what was to be her first trip to India. A women’s rights advocate, she has made progress on at least one front: helping to push forward a mandate, now approved, that women comprise at least a third of Nepal’s parliament.”

Also on the list is the First Lady of the United States Michelle Obama (13) and the editor-in-chief of Vogue magazine Anna Wintour (28).

Lex Limbuhttps://lexlimbu.com
Lex Limbu is a non-resident Nepali blogger based in the UK. YouTube videos is where he started initially followed by blogging. Join him on Facebook and follow him on Twitter.
Previous articlePHOTOS: MaskMandu Campaign By Campaign For Clean Air Rights
Next articleThis Is The Place You Need To Be This Summer!