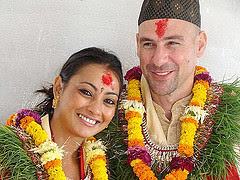 The Khatara item girl Jharana Bajracharya got engaged to Warren Carrer at her parents residence in Sitapaila on the religious day of Ghatasthapana which marks the beginning of Dashain. The event has been described as an engagement ceremony even though many media persons actually mistook it for a marriage ceremony. The Pareni Maya Jalaima actress reportedly told the media that she will not be doing any more Nepali films as reported by Avenues Television. All the best for the couple, however this definitely leaves Jharanas actress life to the rest. Such a pity… people were really rooting for her to make it big in Bollywood.