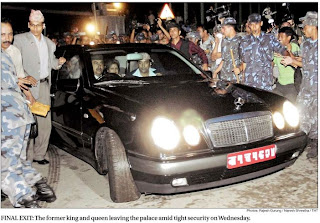 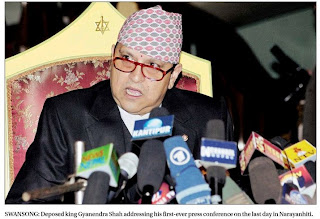 Deposed King Gyanendra Shah yesterday left Narayanhiti Palace once and for all after delivering an emotional speech to the Nepali people at a press conference.
“I was an innocent child; I had neither any wish nor desire nor any possibility of having a distinct role except the compulsion to quietly accept the crown,” he said. He added that he became king seven years ago because of an unnatural, unexpected and tragic incident. “I had no other interests except considerations for the sovereignty, independence, national pride, territorial integrity, peace and the institutional development of democratic, and overall progress of all the citizens.”
He said he and his family were deeply affected by an organised strate gy to spread malice against the royal institution after he became king again in 2001.
“The prejudiced efforts to blame me and my family for the events have been painful to us and are still so. Other members of the royal family who survived the incident are still alive. Bullet fragments which couldn’t be taken out for technical reasons are still in the body of my wife who was also wounded in the incident,” he added.
The former king also said he did not have any moveable and immovable property in foreign lands and he had conserved the ancestral property in an institutional manner.
“During the last seven years neither have I added any property nor have I taken any action by which the traditional property has been reduced,” he maintained.
“I have not usurped the right to property of any member of the royal family. I believe that I would also have rights to maintain private property according to the prevalent laws of Nepal,” he said.
He also pledged to remain completely dedicated to the independence and territorial integrity of the nation, which he said was formed and remained independent and sovereign because of the “blood, sweat and sacrifice of our great ancestors”.Stating that the crown and sceptre had remained as heirloom of his ancestors, he said he had handed them over to the government of Nepal for safekeeping and protection for ages to come.
Escorted by heavy security, the former king moved to Nagarjun Palace later in the evening in a car.
*I personally feel sorry for the King and i feel as if the Moaists have finally got what they wanted and the political parties of Nepal just wanted to be in power and they did whatever they could to get him out of the Nepali political scene. His actions and doings may not have been right and he may not have been the peoples person but I still think that Constitutional Monarchy would have been the better option. The Government have abused Nepals royalty just so they can turn the palace into a Museum. Even though he is Gyanendra, He will still be King Gyanendra, you are born with the status you cant just erase it.