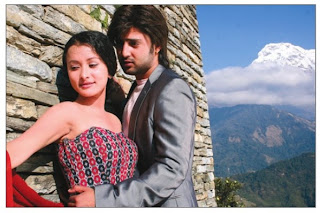 Mero Euta Saathi Chha (Romantic-drama)
Cast: Namrata Shrestha, Aryan Sigdel, Jiwan Luitel, Ashok Sharma, Zenisha Moktan, Sushma Karki
Director: Sudarshan Thapa
Being screened at theatres near you Mero Euta Saathi Chha begins with a young guy from an affluent family -Jai (Aryan Sigdel) who lives life on his own terms, does things as he pleases, but yet is good at heart. Then there is an innocent young girl — Shikha (Namrata Shrestha) in a village waiting for her childhood friend. What they both share is that when it rains they love to dance remembering the steps they did during their childhood with their closest friend.
As Jai turns 21 and is all excited that he will be inheriting his ancestral property, he gets a rather rude shock when he finds out that there are some pre-conditions he must meet to inherit this property. So, to fulfil them he goes back to the village where he spent his childhood and accidentally meets Shikha again.Then a change comes in him and the story that follows shows the revelations that will change their lives forever.
Shrestha is not just pleasing to watch but proves herself as a competent actor. The best thing about her is that she does not overdo the emotional scenes -she is subtle. Sigdel is as good as expected, but there are a few scenes which seem to be a bit too over dramatic. Jiwan Luitel has given a commendable performance. Among the newcomers Sushma Karki with a pretty face and vivaciousness is the most noticeable, while Zenisha Moktan could have done a better job. However, it’s the talented Daya Hang Rai who steals the show every time he is on screen.
Debutant director Sudarshan Thapa has come up with an interesting movie to watch. The sequences flow smoothly. The cinematography by Rajesh Shrestha is superb capturing the scenic beauty at precise moments. It did seem that a few fight scenes could have been left out and that the movie had just focused on the emotional aspect.
Another admirable aspect of the movie is the music and background score. Sugam Pokhrel and Bipin Acharya have delivered some really good numbers. The background score by Tsujil Karmacharya heightens the beauty of the scenes.
However, in this movie one can find traces of various Bollywood, Hollywood and Korean films as the story flows. The movie does seem to have been stretched more than necessary making it a bit too tedious. The biggest drawback of the movie is that it has its dose of typical Bollywood movie scenes that especially reminds one of the 80’s and early 90’s of Bollywood.Along with that it has some really clichéd dialogues which makes it fall flat, failing to create an impact as promised or creating something that is totally different and new.
UPDATE: The review is taken from The Himalayan Times

Lex Limbuhttps://lexlimbu.com
Lex Limbu is a non-resident Nepali blogger based in the UK. YouTube videos is where he started initially followed by blogging. Join him on Facebook and follow him on Twitter.
Previous articleNepal Tourism Year 2011 – Will it Be a Success?
Next articleThe Limbuwan Issue