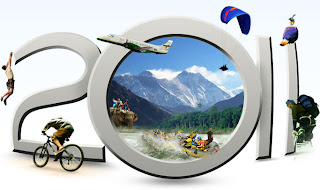 ‘Nepal Tourism Year 2011’ is geared to become the biggest thing to happen for the tourism industry in Nepal after ‘Visit Nepal 98’, however unlike the previous campaign the upcoming one has a strong aim to achieve. That is to bring in 1 Million tourists in the selected year. The Government is upbeat in making this campaign successful and has already launched press-meets, introduction nights in various countries abroad. The ever-changing governments of Nepal seem to have good ideas yet they never manage to actually implement their ideas and carry their duties out.
To make Nepal Tourism Year 2011 a success, the government needs to start from Nepal itself instead of advertising abroad. The government needs to upgrade the facilities provided in Nepal since maintenance does not seem like its in their to-do list at all. Tribuvan International Airport should be a good starting off point, to handle 1 Million passengers it would be appropriate to upgrade the airport by converting the current system to a western approach by introducing computers. Better signage at the airport is a must, also the current staff ranging from the high officials to the cleaners should all be re-trained since theyre customer service skills lack in every department. This not only goes for the airport staff but for most workers in Nepal. There’s hardly any ‘Thank You’ and ‘Welcome’.
15. Thats the number of months left till 2011. It is almost certain that there will probably be atleast 2-3 Prime Minister changes in Nepal during that time. Whatever happens, the government must realise they must act accordingly since a political fiasco or another Jana-Andolan will be a major disadvantage to tourism and economy in Nepal. On the other hand the government must work hard to minimise the effect of small minority groups such as Limbuwan, Tamuwan etc since they have quickly captured the power of their states. The minister of tourism and civil aviation should make it a priority to increase and update the infrastructure in Nepal, this maybe by redoing the old bridges or repairing old roads again. Road access to far-flung areas are a must since these may open up new trekking routes.
Information Centre’s should be set up in various hotspots around Kathmandu and Pokhara. They should work in a timely manner and provide reliable information to the tourists, however leaving this to the governments hand would probably never work out since most of the actions they undertake fail to finalize. Private companies should take up these approach since theyll be able to carry this out and also maintain it for the long haul. Speaking of long haul, Kathmandu needs to be a more accessible destination. This can be done by linking the only airport to more European and Asian hubs.
These are a few from a list of many things to be done in Nepal.

Lex Limbuhttps://lexlimbu.com
Lex Limbu is a non-resident Nepali blogger based in the UK. YouTube videos is where he started initially followed by blogging. Join him on Facebook and follow him on Twitter.
Previous articleKusume Rumal Trailer
Next articleMero Euta Saathi Cha – Movie Review