If you’re reading this then you might be 5% interested to read about my recent trip down under to Australia for FashionMandu! Well I hope I can increase that from 5% to slightly more. If not, then scroll away (as we do everyday) and view the photos. By the way, I am not the best in taking photos or selfies.

I arrived earlier than the stated time at the international airport in Sydney which I found to be rather small and quite empty. “See you tomorrow”, that was the last message I had exchanged with the organizer and I automatically assumed that they would be receiving me at the airport in the morning… we’re talking 6.30AM here. Amusingly, I got out and there was no one there. Lol. Thankfully it was only a matter of minutes before I saw the event team rush towards me. I had landed about 35 minutes early.

There was no wasting time as we went from the Sydney airport straight to Circular Quay! There I was in front of the Sydney Opera House, looking out to the Sydney Harbour Bridge. Incredible. Iconic. I’ve grown up seeing these buildings on films, TV and especially during their New Year’s Fireworks! After a walk through the botanic garden, we ended up near Town Hall from where we headed back to the airport to pick up Namrata Shrestha, the showstopper for FashionMandu 2016.

Unlike my arrival, it took quite bit of waiting for Namrata to arrive. Apparently they were inside the plane waiting for an hour on the runway! I hear Sydney will have a new international airport located out of the city in the future. It’s pretty amusing that the current airport is located in the city! After she arrived, it was straight to the hotel and planning for the evening ahead.

On the evening of the very day we arrived, we had a press conference for FashionMandu at the Third Eye Bar and Function Centre in Rockdale! Though slightly stretched, it finally felt like we’ were hitting the road and ‘FashionMandu’ was really happening! The Australian showstoppers were so tall… I didn’t take a photo with them. They even had high heels on. *sob*

I woke up early and then I slept and woke up late. Doesn’t make sense right. On this day we had a brief interaction session at the King’s Own Institute, the title sponsor of FashionMandu 2016. We got there 30 minutes late. An actress has to look pretty y’all. Looking back, the 30 minutes we spent at the college was probably one of the most memorable parts of the entire experience. The college staff and the students gave such a warm welcome! There was a red carpet, photo backdrop and flowers… oh and photos of Namrata and me as well. Dang. That was my film-star moment right there and I don’t even have any films. 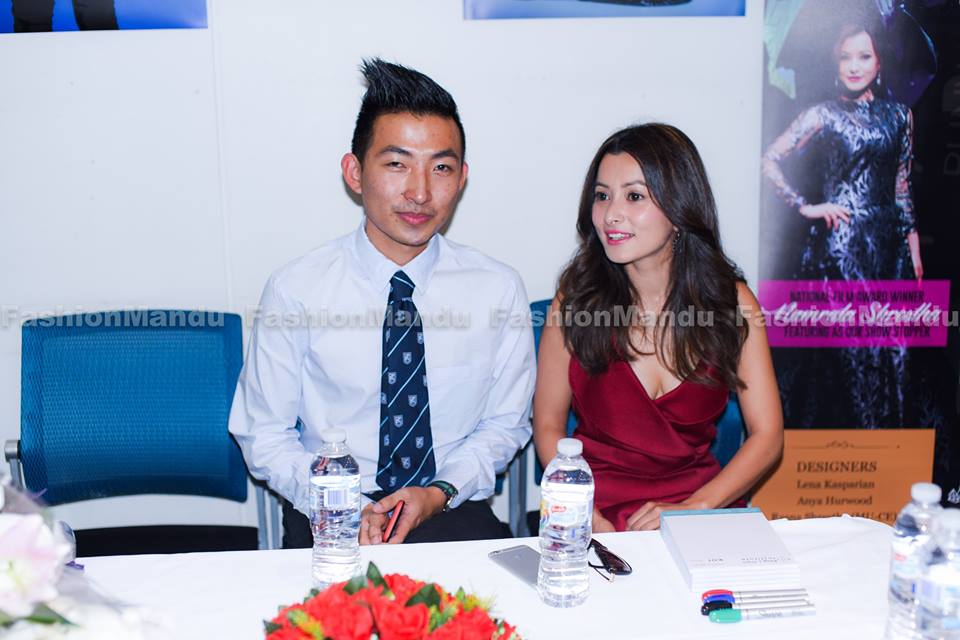 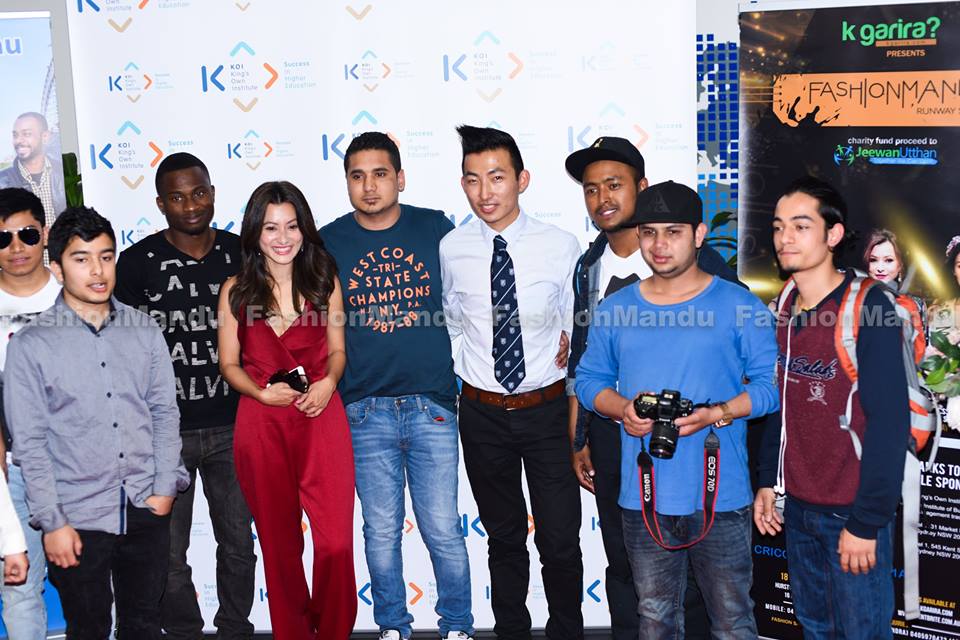 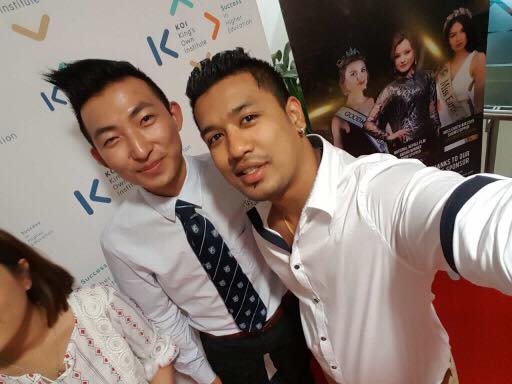 Of course the many guys and girls were there to take a selfie/photo with Namrata and I kept my distance to ensure that I wasn’t intruding their space. Come on, if I was meeting Britney for a photo – I’d probably get annoyed to see another guy in the pic too loool! However, the students there – who I am guessing are – my age – were so kind and appreciative of our time there. I remember one girl there who brought a book and we signed it. That’s special. And memorable. Pieces of paper may get lost but books often do not. 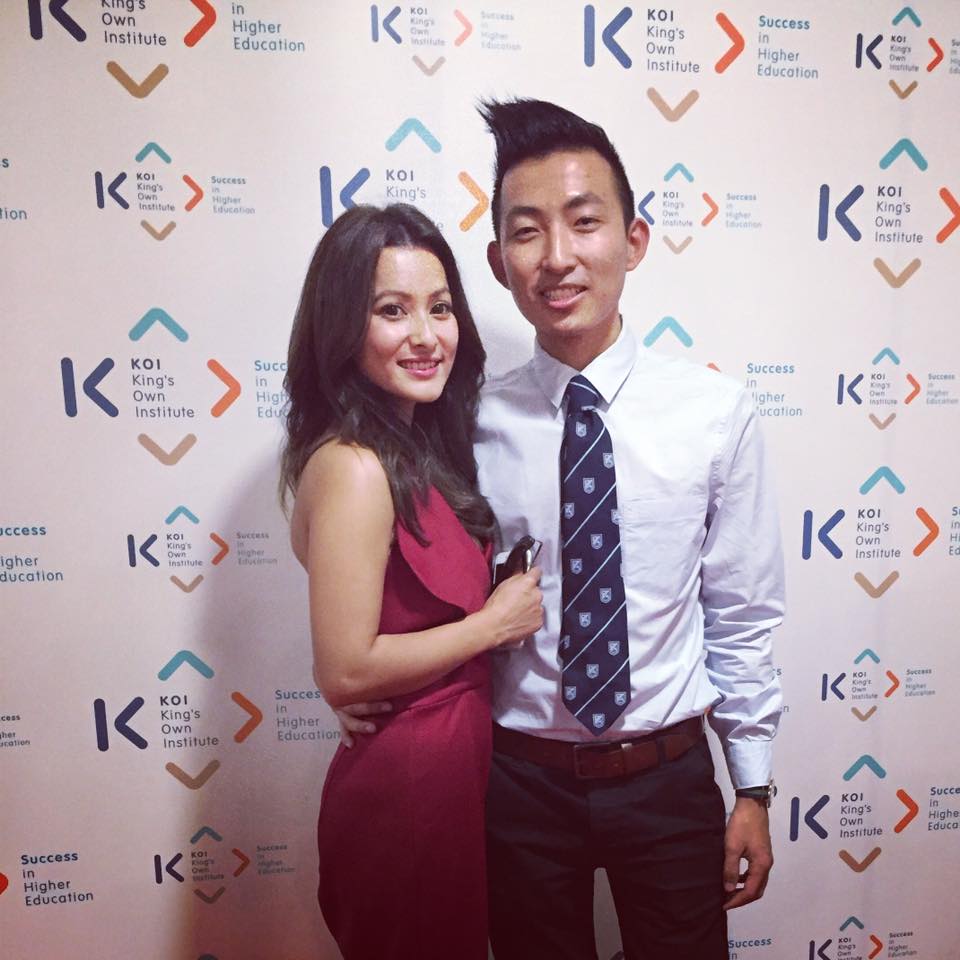 In and out. We were off to Watson Bay for a bit of sight-seeing! Photos by Newa Kiran Photography. 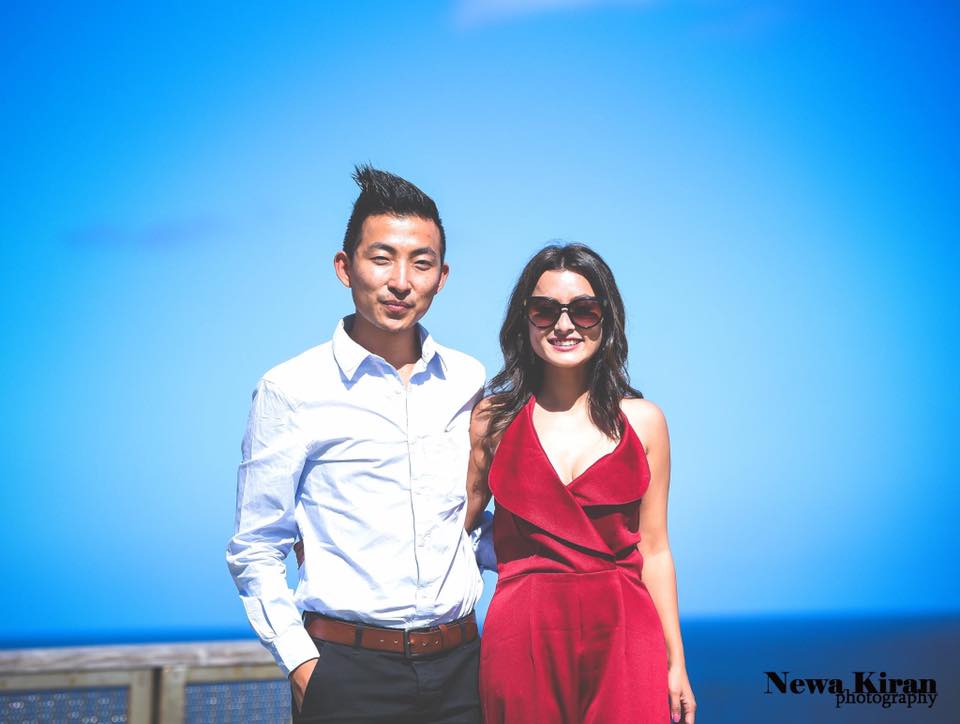 As we sat there sipping on our cider, the idea of going LIVE on Facebook came about. It would be around 9PM in the evening back in the hotel. It sounded good then. After the bay, it was off to dinner at the Zinger Taj Restaurant in North Sydney! A beautiful part of the city I think. We saw the Harbour Bridge at night and it looked pretty splendid.

I was so sleepy and if I could’ve I would’ve just cancelled the whole Facebook LIVE interview. We were already late. Even if we had postponed the interview, we would’ve had to do it in the morning #trapped. We did it. Tired and sleepy. The video should be below. From where I was sat in the interview, I walked a few steps and then I was gone. Sleep.

Finally! An off-day! Well before we could enjoy the day we had to make a trip to Ashfield for Namrata’s fitting. After that we took a ferry from Circular Quay to Manly! Chilled by Manly Beach, then made our way to Taronga Zoo and got the ferry back to Circular Quay. We quickly dropped by Westfield Sydney and the shops nearby and headed to Darling Harbour for dinner.

The D-DAY! Prep work from the morning to mid-day and then boom, it was the show in the evening. I’ve written about FashionMandu the event on a separate post. It was a major learning experience and whilst there are some areas to improve on, for the event and myself, it was an event which had great performances, talents, designers and models on stage. Quality. 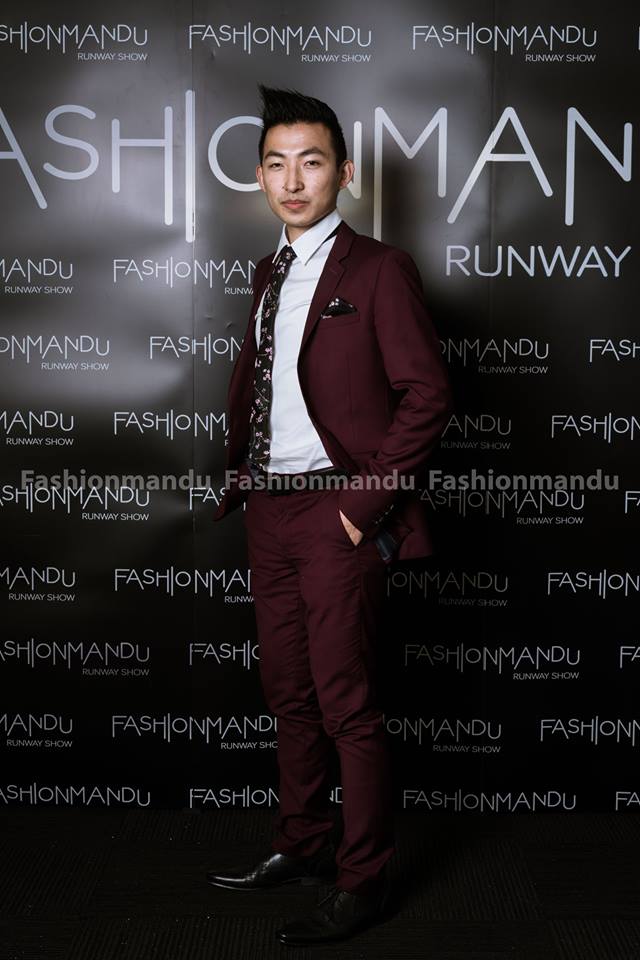 I was tired, hot and hungry after the event. Thanks to Third Eye for looking after us. I left nothing on that plate of food. lol. I joined Namrata and her friends as we headed to Darling Harbour to chill after a long day! 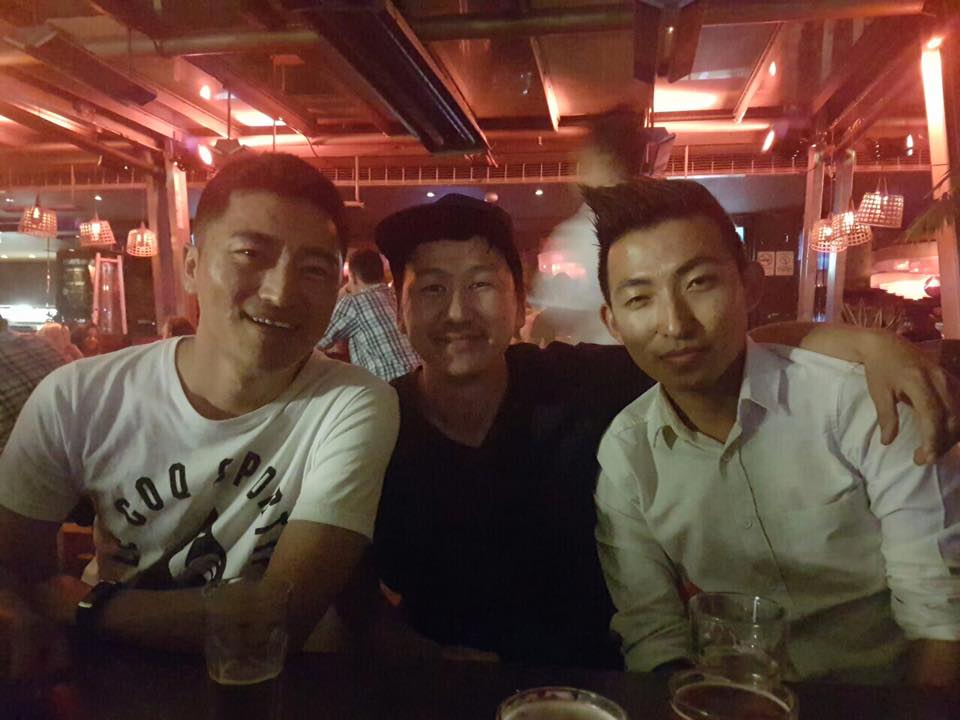 We had plans to visit Bondi Beach but the day outside looked rather gloomy. I am not quite sure whether it actually was or if it was the tinted hotel room windows.

In the evening we headed to Burwood for the post-event dinner with the FashionMandu team. The evening was more relaxed and after a spot of drinks, I announced the FashionMandu Ambassadors for 2016, the Best Model and invited several key guests and Namrata to come on stage to share a few words. We really kept it minimum because I hate it when people speak too much or the audience have to sit there watching people receive khatas and what not. I finally actually got to have a chat with people as well, from young Nepalese like myself to some online friends who were present at the event.

Then I slept like a baby on the drive from Burwood to Thai Town. I was so tired. I wasn’t keen on going out-out but I didn’t want to stay in either. After a quick bite we headed to The Argyle and that was basically a farewell to sleep. OMG I / we, had so much fun! It was just fun to dance and just be! I am good at being ‘be’ by the way. I had a flight at 10.30AM in the morning but still. I’ve done far more intense things in life so we partied till the end and thought it would be a great idea to walk through The Rocks and go to the Harbour Bridge. By the time we made it back to the hotel it was 5.30AM. During all of this time, I was hanging out with a group of really funny and cool Gyanodaya 2002 people. Hopefully we’ll meet again.

After about two hours of sleep, I woke up and said by Goodbye to Namrata who was returning to Nepal in the late afternoon and headed to the international airport for my 10.30AM flight to FIJI. Thank goodness our hotel was located right outside the airport.

I will write about FIJI and my last two days in Sydney on a separate post. If you’ve read till now or made an attempt to, thank you for your time and patience.

That’s the whole FashionMandu Experience and what an incredible time it was! My gratitude to the event team for their warm hospitality and managing us well. Lastly, this might be trivial but thank you so much for the Australian SIM card – all I need is to be connected to the world and I feel like I can go anywhere and do anything.

Lex Limbuhttps://lexlimbu.com
Lex Limbu is a non-resident Nepali blogger based in the UK. YouTube videos is where he started initially followed by blogging. Join him on Facebook and follow him on Twitter.
Previous articleNepal-America Film Society Announces Nepal-America International Film Festival
Next articleThis Powerful Short Film Shows How Nepali Communities Treat Domestic Abuse