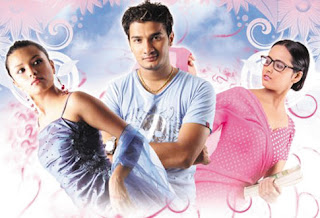 Nirak Poudel’s Kusume Rumal — a sequel to his father Uddhab Poudel’s original Kusume Rumal released more than a decade ago — is a love story that ends in a tragic note. The earlier version of Kusume Rumal had Tripti Nadekar, Udit Narayan Jha, Bhuwan KC and Neer Shah in the lead roles. In its sequel, Tripti still mesmerizes the audience while Neer Shah has played a guest appearance. Meanwhile, Bhuwan KC was happy to be among the audience, while Udit Narayan Jha is obviously too busy in Bollywood to act in Nepali film today.

To come to a conclusion whether Nirak Poudel’s sequel is a family entertainer is a difficult job. And the reason is that the flick is replete with takes that would rather qualify for an adult audience. The dialogues, which at times get a bit too bawdy, should have been avoided or not vocalized to such an extent. In that case, the sequel of Kusume Rumal should be recommended in the category of “PG – 12 (Parental Guidance – under 12 restricted).”

Talking about the story and screenplay, scriptwriter Pradip Bhardwaj seems to have been heavily influenced by the Hollywood movie “A Walk to Remember”. The first few minutes into the flick and the climax appear strikingly similar.

The movie unfolds with Gina (Usha Rajak) narrating the entire story with Sohan (Niraj Baral) sitting quietly in the background. Sohan and Gina are best friends at college. With a cool stud attitude in his college, Sohan is a favorite of many and Gina is attracted to her. Kusum (Ruby Bhattarai) is a neighbor of Sohan and studies in the same college. The bespectacled Kusum with long hairs prefers to live a low key life and dresses up traditionally. That is why many do not want to befriend her. But Sohan had always been looking for someone like Kusum to spend his entire life with. He befriends her and both fall in love, while Gina’s love for Sohan remains unrequited. She leaves for abroad while Sohan and Kusum tie the knot. Everything’s hunky-dory till the two meet an accident immediately following their honeymoon. That’s all for the story as I wouldn’t want to play spoilsport for those who are planning to turn up at the turnstiles.

Kusume Rumal compels you to recall many instances from Bollywood blockbusters like “Kuch Kuch Hota Hai” and “Kal Ho Na Ho.” The movie needs a special mention for one thing though. It’s in the same league of movies directed by Yash Chopra and David Dhawan in terms of direction. Moreover, Niraj Baral’s debut cast surely will get him more directorial offers in the times to come. However, that would only be possible if Baral plans to return from Australia. Sad that he even missed the premiere of his first movie.

Newcomer actress Ruby Bhattarai steals the show, while Usha Rajak boasts of a fine screen presence. All the soundtracks composed by Souryajeet Baskota are bonus to the movie and Aditya Narayan Jha’s voice in the title track stands out. It is one more time a fresh feel to listen Sugam Pokharel and Nima Rumba. The cinematography in 35 mm cinemascope is brilliant and Kabi Raj and Pooja Gurung’s choreography is worth a mention. All in all, Kusume Rumal offers a breezy entertainment. Let’s also keep our fingers crossed till Poudel’s upcoming movie “Assassination of Royal Nepal Family hits the marquee.

Lex Limbuhttps://lexlimbu.com
Lex Limbu is a non-resident Nepali blogger based in the UK. YouTube videos is where he started initially followed by blogging. Join him on Facebook and follow him on Twitter.
Previous articleDJ Tantrik – Namrata Issue
Next articleThe Beauty of Nepal