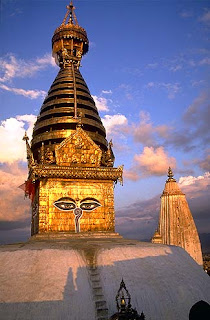 As I landed at Tribhuvan International Airport, finally it all came to life. The summer trip to Nepal had finally happened after a year’s delay. So much had happened in the country since I had left, Maoists joining the government; King Gyanendra ousted and lastly ‘Naya Nepal‘ had been on the tip of everyone’s tongue.
I was most excited about that. The Naya Nepal which I had missed out on, I wanted to see, feel, and hear the changes that had took place in my motherland. Getting the taxi home had never seemed so chaotic, traffic had doubled, pollution had worsened, garbage and faeces was scattered along the sides of the road. This clearly wasn’t what I had in mind. Kathmandu has been ram sacked with new buildings everywhere, the non-new buildings also seems to have got more floors added. I didn’t understand; where was the money coming from?
One could see fancy billboards of shopping malls and residential apartments in each major roundabout. Private sector had been developing rapidly. Now travelling by tuktuk and taxi’s was the same since only bikes can guarantee you to get to a destination fast enough. The Naya Nepal hype had definitely swept through Kathmandu, the city of durbar squares has become the city of people with crowds assembling everywhere at any given opportunity. Seeing all these had me very enthusiastic to explore out of the valley.
On my journey to Ilam, Narayangadh, and Gorkha my expectations had died seeing the surroundings. After seeing Kathmandu as this trendy soon to be fully hip city, the rest was not only missing the touch of Naya Nepal but also lagging behind with development. For the people living in rural areas, Naya Nepal will probably not be seen by them in this lifetime, they argue that Naya Nepal was a term only used by the media and never actually implemented. There had been no significant change occurring in these areas.
As the plane headed on the tarmac, I remembered all my expectations; the expectations which was hyped by politicians and the media. I was saddened to leave a nation which now needed help more than ever. Before, there was a civil war but now there’s a war between everyone; ethnic groups, journalists, public sector workers and politicians. Only Kathmandu had witnessed Naya Nepal but the rest had only seen it on posters.
By Lex Limbu

Lex Limbuhttps://lexlimbu.com
Lex Limbu is a non-resident Nepali blogger based in the UK. YouTube videos is where he started initially followed by blogging. Join him on Facebook and follow him on Twitter.
Previous articleKFC and PIZZA HUT arrive in Kathmandu
Next articleJharana – This Week