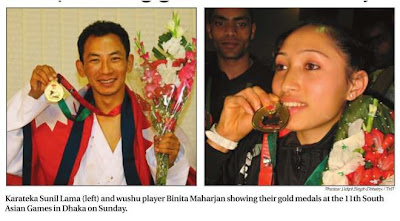 The South Asian Games are currently going on in Dhaka and Nepal has also taken part. After a dim start, Nepali players Sunil Lama and Binita Maharjan have managed to do themselves and the country proud by earning a gold medal each for taichi and karate. There had been various uproars during the event when the Nepali flag was placed upside down and during the opening ceremoney the players had to sing the old national anthem.
“I dedicate this gold to all the Nepalis back home,” said Binita. She said she felt extremely proud of being the first to deliver gold for the country. A first-timer in the regional meet, Binita credited the win to her family, coach and friends. She is also the bronze medallist of the 2008 SAF Championship held in Dhaka.
“This is the biggest achievement of my career,” said the player.
Coach Prakash Lama said the two-week training in China had leased a great deal of confidence in the players. “She performed more than I had anticipated,” he added.
Well Done to Nepali womens footy team for thrashing Pakistan aswell. 😀

Lex Limbuhttps://lexlimbu.com
Lex Limbu is a non-resident Nepali blogger based in the UK. YouTube videos is where he started initially followed by blogging. Join him on Facebook and follow him on Twitter.
Previous articleHow Castist Are You?
Next articleMaoist Leader Goes To See a BOLLYWOOD Film