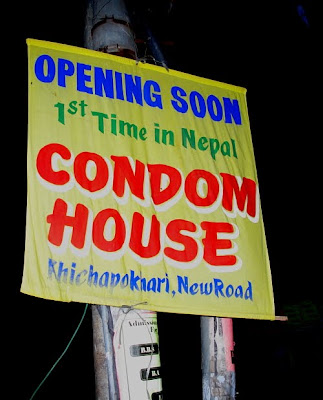 Nepal had the first casinos in South Asia and was probably the first in the region to approve of same sex marriages. Now the country has its first store dedicated to sex aids ranging from condoms to toys and does brisk business.

‘When I first started putting up posters and banners to let people know I was starting a sex aid store, they were shocked and furious,’ says Yubaraj Neupane, the 32-year-old former health worker who has opened the sex aid store in the heart of the capital. ‘The shopkeepers in the area even abused me and accused me of trying to bring shame on the neighbourhood. But today people are saying it was a much-needed thing.’ From Sunday, he plans to start a campaign blitzkrieg targeting the busiest streets in Kathmandu.

Neupane’s venture, ‘The Condom Shop’, is located close to Dharahara, the tallest tower in Kathmandu’s Sundhara area that was built by a queen in memory of her mentor. Tucked away among rows of clothes shops is the innovative store that stocks condoms from India, Malaysia, Japan, Germany and Singapore and other sex aids as well as tiny machines said to enhance capability and pleasure. The tiny store does brisk trade, with about 10 percent of the customers being women and another 20 percent being commercial sex workers.

‘I find it easier to buy condoms at the Condom Shop than at the drug stores,’ says Saroj Bhattarai, a 38-year-old businessman who had come with a friend to buy condoms. ‘At the drug stores, there are often women serving behind the counters and it is sort of embarrassing having to ask them. Here, there’s no need to hem and haw because the seller knows what you have come for.’ Neupane’s years in the health sector also makes him adept at helping customers, especially first timers.

‘A drug store will simply sell you the brand you ask for without telling you how to use it or whether it’s suitable for you. Different people have different needs and should be advised on what sort of condom or sex aid to use.’ A 48-year-old, who is a regular customer and identifies himself only as Ram, buys aids worth over Nepali Rs.1,400 after discount, a large amount in Nepal. When Neupane advises him to buy a lubricant, he doesn’t baulk at the price – nearly NRs.800 – but pauses to tear off the label on the tiny pink bottle. ‘If this falls into other family members’ hands, there will be awkward questions,’ he mumbles. Neupane says the feeling of awkwardness about something that is essential to human nature is due to it not being easily accessible.

‘If you see, for instance, female condoms every day, they will no longer be a strange object but a familiar thing,’ he says.‘There should be no social stigma about using sex aids,’ he says. ‘After I opened the store, a private television channel held an interaction with me, doctors and members of the public and the conclusion was that they help bring down the incidence of HIV/AIDS, sexually transmitted diseases and rape and molestation.’

Source
Check out the Number 1 Condoms advert – such a community feel to it right? I likes it.
”Hamro Jindagiko Rang Ho Number 1”

Lex Limbuhttps://lexlimbu.com
Lex Limbu is a non-resident Nepali blogger based in the UK. YouTube videos is where he started initially followed by blogging. Join him on Facebook and follow him on Twitter.
Previous article1974 AD Coming to UK
Next articleWho is Aryan Sigdel?