Firefighter Steals From House on Fire 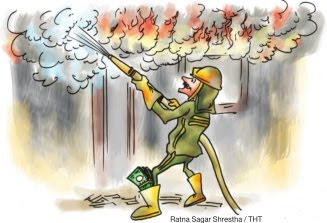 Police nabbed Head Constable Badri Karki, 45, fire-fighter, Juddha Fire Engine, under the Ministry of Home Affairs, with Rs 1 lakh he had stolen from a living room of a house in Dhumbarahi that caught fire this morning. Police said property worth Rs 1 million was gutted.

According to Metropolitan Police Range, Hanumandhoka, Karki had stolen the amount by entering the room on the pretext of extinguishing the fire. SP Ganesh KC, in-charge, MPR, said Karki, one of the firefighters, who was entrusted with taking the fire under control, climbed up the room along with fire extinguishers and stole the money from a locker instead.
A fire broke out in the house belonging to Uddhav Dahal after a cooking gas cylinder exploded at around 9:30 am. SP KC said, “The fire victims rushed to their living room to check the fate of their property. They were shocked to find cash missing from the room.” KC added, “A special squad dispatched from MPR cordoned off the area and searched every one. Upon checking, Rs 1 lakh was found hidden in his boots.” Karki claimed that his team mates had salvaged the money and handed it to him to give it back to the owner later. “Karki talked about the money only after he was searched. He has added to the pain that the fire victims underwent. It is inexcusable,” argued KC.
Karki, who hails from Bhaktapur, has been a firefighter for the past 19 years.
He has been booked for theft and will be dismissed from service if convicted.
Source: The Himalayan Times