Battling a butterfly at midnight! 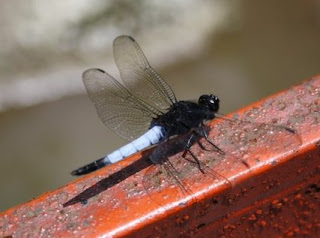 It was one of those nights; hot and humid. I could not sleep. After countlessly trying to update playlists on my iPod, drenched in the sweat of frustration I turned off the lights and lay on my bed cursing the day I accidentally stepped on my iPod. After a while I dozed off. In the darkness my heart started to beat erratically, thump-thump…. With sweaty palms I turned on the bedside lamp, grabbed the insect repellent from the window sill and searched far and wide in my room for the intruder but to no avail. It was already past 2am and I felt fatigue creep into my bones, after a long day at work. I lay down on the bed again, spray ready in my hand armed for battle. In true annoying fashion the buzz started to sound again…bzzzzzz…..Ah! then I spotted the fiend! A buzzing butterfly! Yet not a butterfly but a cross between a butterfly and a gross looking insect with a thick body protruding at an odd angle in the front and behind with wings…eeks! I chased it, spraying madly wherever I spotted it. On the curtains, under the lights and so on. The room started to reek of chemicals and I coughed and sneezed a couple of times.

Finally I cornered the fiend into a corner of the wall and managed to empty nearly half the bottle of insect repellent on it. And yes! Lo and behold! It fell to the carpet and lay twisting and turning(writhing in agony I like to think). After a few minutes of being thoroughly entertained, excess repellent inhalation and weird sensations in my stomach the fiend was still squirming! With disgust I grabbed the glass on my bedside table and covered the evil on the floor with it. Gradually, it stopped moving and lay still. I felt once again victorious and lay down on my bed to fall into a deep slumber. Only this time I was being chased by giant butterflies with glass eyes!

p.s.observant you’s may have noticed the picture is a dragonfly and not a creature of my description but it was one I took when I visited ‘Jhakri Falls’ near Gangtok, Sikkim 2009.

Suddenly there was this buzz….zzzz…..zzzz…buzzing sound hovering close to my ear. I lay still paralysed with fear but fully awake. I am self proclaimed insect/animal/ creature phobic. Okay now was not the time to sit still and concede defeat. Was I going to be frightened of a super small creature? Me who loves freedom fighters, believes in fighting to the end, never giving up and the usual blah blah… So I nervously gathered my wits and jumped up pushing back the covers.

The buzzing got louder. I felt the blood pounding in my ears. Dear god! Save me even though you don’t exist! But just save me and I will believe you do exist!!!