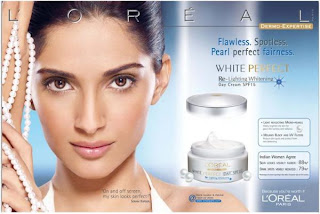 ‘ kasto ramri, gori cha ni tyo kti’, no not me but I have heard this quite a lot. Lately I have come to notice that our people talk about skin colour a lot. Nepali people are tanned, semi tanned, fair, pale, semi-pale, beige in colour etc but it seems that we have a propensity to favour a particular skin colour. Not all of us are this way but certainly we have been involved in such a conversation ourselves or heard our mums or aunts say it. For some ‘to be fair’ is the way forward. Hence the market is flooded with products like ‘fair and beauty’ and ‘fair and handsome’ endorsed by celebrities such as SRK.

One of the theories is that wealthy people such as land-owners in the yonder days stayed in the comfort of their homes in the day time whilst their labourers slaved away under the sun tanning away with their skin colour also darkening. Hence, back in those days fairer people it was assumed were affluent and from the upper echelons of society. The French and the Victorians including gents powdered their noses and faces with white substances to appear to be of a lighter skin tone for such similar reasons. Another reason could also be the media (specifically Asian). There is fierce promotion of goods that make you look ‘prettier and fairer’ and now ‘fair and handsome’ too. Glossy magazine covers and big posters with flawless skin and fair good looks are advertised in abundance making it harder for the common man to identify with the human within.

In our aesthetically driven society looks matter and skin colour does to. But perhaps this is not such as bad thing as it focuses the mind of the individual in beautifying themselves and their lives which makes them happy. But certainly discriminating against somebody based on their colour type is wrong because it is so petty, it is so trivial, it is cowardly.

Lex Limbuhttps://lexlimbu.com
Lex Limbu is a non-resident Nepali blogger based in the UK. YouTube videos is where he started initially followed by blogging. Join him on Facebook and follow him on Twitter.
Previous articleYouthology – From Hong Kong!
Next articleAudio Release of Kohi Mero