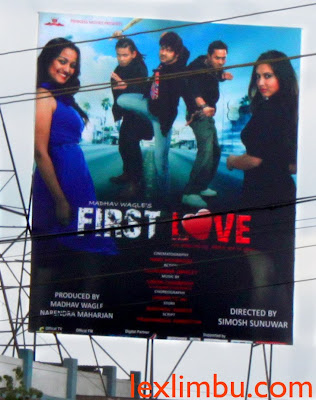 Poster of First Love in Kathmandu
Upcoming Nepali film First Love is all set to release on Friday August 6th 2010. The movie which has been directed by Simosh Sunuwar has quite a star cast. Aside from that the screenplay has been done by Prachanda Shrestha who has tried his best to bridge the gap between the typical Nepali viewers and the better quality seekers. Shrestha will also be directing the upcoming Purple Days which stars Namrata Shrestha in a one of a kind role.
I have read many comments from Nepali movie supporters who want to see real cinema made by the new directors, however I feel that movies such as First Love, Kohi Mero, Mero Love Story are needed as its a perfect way to escape. They may be full on romance and drama, yet for people living in the chaotic environment of Nepal where nothing is consistent these type of movies will let them breakout and maybe take them beyond the society which they live in for that duration of the film. I hope the movie delivers in terms of story, acting, presentation and is the package which we all have been waiting for. Eagerly waiting to read the movie review by Avas Karmacharya 😀
O and also, this movie is tottally being promoted on Facebook like mad, with more than 2800 fans…Im sure the producers will be laughing to the banks. 😉
Image: Binod Gautam