Buddha Air has started operations in its second international destination to Lucknow from today. This is the second intl destination after Paro which was introduced in mid 2010. The airlines officials state that they will first begin with a 47 seater airliner, which will later be increased if the crowd starts to flow steadily. The marketing head of Buddha Air says, that they hope by the month of March this year, they should commence flights to Kolkata also. Previously, Cosmic Air had also flown to various Indian cities but ceased operations after financial difficulties. Lets hope Buddha Air does not suffer the same fate. All the best to them and their future routes including a proposed (Pokhara to New Delhi). 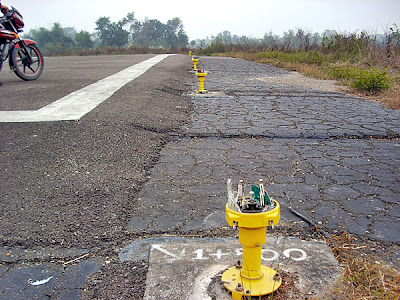 In similar aviation news, Lord Gautam Buddha International airport in Bhairawa had to stop night flights after an unidentified group broke 25 runway lights. Officials said each runway light exported from foreign countries costs around Rs. 100,000. The security in the airport needs to be upped, not only in Bhairawa but everywhere else. Theres hardly any adequate fencing and protection and why would the group do that. Come on people, this act is Nepalis destroying Nepali property.
Not cool.