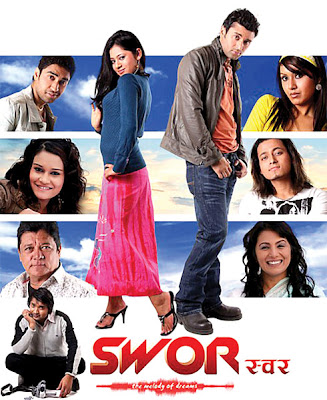 Its just been more than a week since Prasanna Poudel’s movie Swor was released in Nepal and once again people have left no stones unturned in ripping the movie apart. I remember when Kohi… Mero recieved the similar treatment. I haven’t watched the movie so I dont know what it’s really like, however I am confident that it’s better then the tried and tested movies which are being produced in dozens currently in Kollywood.
Nagarik Daily’s review ends in a sour note as it states :
म्युजिक भिडियोका निर्देशकले मोडलिङ क्षेत्रका कलाकार लिएर टुके क्यामेराले खिच्दैमा र जयनेपाल वा कुमारी हलमा रिलिज गर्दैमा फिल्म राम्रो हुँदैन
There are positive reviews for the movies aswell and one of the actress from the movie helplessly defends herself on the SWOR Facebook fan page.

When Kohi… Mero was released there were people who just told me the movie was crap, I asked them have you seen it, they said no. Dont let other peoples review become your own review. Go out and watch it. I remember what the director of Dasdhunga said to the media ahead of his movie’s release, he asked people to not expect too much but we Nepalis humans tend to expect TOO MUCH.

Enjoy the awesome track from the movie. Loves It. ha!