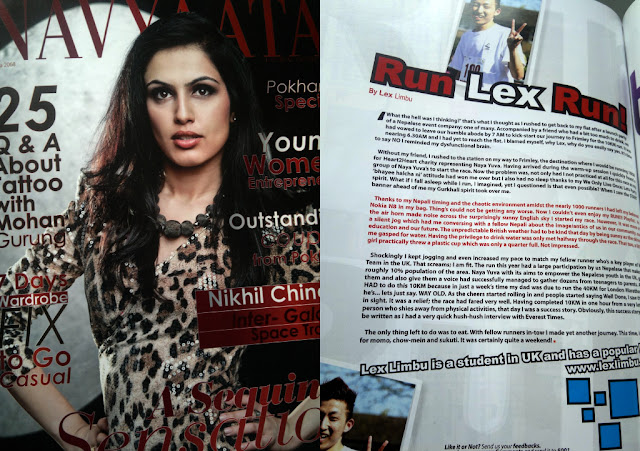 ‘What the hell was I thinking?’ that’s what I thought as I rushed to get back to my flat after a launch party of a Nepalese event company; one of many. Accompanied by a friend who had a bit too much to drink, we had vowed to leave our humble abode by 7 AM to kick-start our journey to Frimley for the 10KM run. It was nearing 6.30AM and I had yet to reach the flat. I blamed myself, why Lex, why do you easily say yes. It’s time to say NO I reminded my dysfunctional brain.
Without my friend, I rushed to the station on my way to Frimley, the destination where I would be running 10KM for Heart2Heart charity representing Naya Yuva. Having arrived during the warm-up session I quickly found a group of Naya Yuva’s to start the race. Now the problem was, not only had I not practiced at all for this race as my ‘bhayee halcha ni’ attitude had won me over but I also had no sleep thanks to my We Only Live Once; Lets Party spirit. What if I fall asleep while I run, I imagined yet I questioned if is that even possible? When I saw the START banner ahead of me my Gurkhali spirit had took over me.
Thanks to my Nepali timing and the chaotic environment amidst the nearly 1000 runners I had left my beloved Nokia N8 in my bag. Thing’s could not be getting any worse. Now I couldn’t even enjoy my RUN!!! Playlist.  As the air horn made noise across the surprisingly sunny English sky I started my race. However, it was more of a silent jog which had me conversing with a fellow Nepali about the image/antics of us in our community, our education and our future. The unpredictable British weather had to be kind that day by being sunny as the skinny me gasped for water. Having the privilege to drink water was only met halfway through the race. That too, a little girl practically threw a plastic cup which was only a quarter full. Not impressed.
Shockingly I kept jogging and even increased my pace to match my fellow runner who’s a key player of MBZ Team in the UK. That screams; I am fit. The run this year had a large participation by us Nepalese that makes up roughly 10% population of the area. Naya Yuva with its aims to empower the Nepalese youth in the UK, guide them and also give them a voice had successfully managed to gather dozens from teenagers to parents. Also, I HAD to do this 10KM because in just a week’s time my dad was due to run the 40KM for London Marathon and he’s… lets just say. WAY OLD. As the cheers started rolling in and people started saying Well Done, I saw the end in sight. It was a relief; the race had fared very well. Having completed 10KM in one hour from a very lethargic person who shies away from physical activities, that day I was a success story. Obviously, this success story had to be written as I had a very quick hush-hush interview with Everest Times.
The only thing left to do was to eat. With fellow runners in-tow I made yet another journey. This time in search for momo, chow-mein and sukuti. It was certainly quite a weekend!
Published on Navyaata Jestha 2068
For Article 1 – Click Here

Lex Limbuhttps://lexlimbu.com
Lex Limbu is a non-resident Nepali blogger based in the UK. YouTube videos is where he started initially followed by blogging. Join him on Facebook and follow him on Twitter.
Previous articleVote for Mr and Miss Nepal Australia 2011
Next articleWhite Party + Groovy Night = 11 JUNE