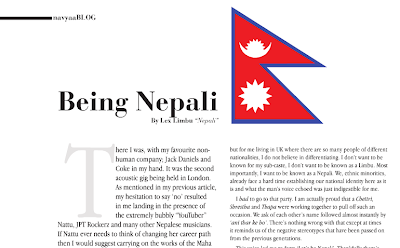 There I was again, with my favourite non-human company; Jack Daniels and Coke in my hand. It was the second Acoustic Gig held in London. As mentioned in my previous article, my hesitation to say ‘no’ resulted to me landing in the presence of the extremely bubbly YouTuber Nattu, JPT Rockerz and many other Nepalese musicians. If Nattu ever needs to think of changing her career path then I would suggest carrying on the works of the Maha Jodi. One certainly needs to empty their bladder before they situate themselves next to her. Now more about the event, imagine watching YouTube but live, also add a few technical glitches and off-beat voices. Not to forget our Nepali Timing. Yes, I’m guilty of it and was guilty that evening too. But Hey, I’m Nepali; we love to blame, right?
The gig had a handful of photographers, too many I would say. Awkward smile, forced smile, plain unhappy. I pulled off all those poses. While I waited to top up my drink, a conversation started with an eager music lover. He was a ‘fan’ of the acts performing that evening. Like how it goes, bro ke garnu huncha, ka basdai ho, UK ako kati bhayo, it was all covered. Unsurprisingly next on our guff list was the Nepali party scene in the UK. Just a month later there was a highly publicized launch of two event companies set to take place and for the next 10 minutes our talk completely focused on the organizers. When I say organizers, I mean the caste of those organizers. There I was standing opposite someone who no doubt is mature than me; certainly older and he was advising me to not attend that party as one of the organizer was a Chhetry.
If only the photographers were there at that instant. They would’ve captured a slightly bewildered ‘k re’ expression on my face. I had to ask him to repeat and justify himself for his request. It was plain simple for him; because people of Chhetry and Bahun castes are already doing well in Nepal and we can’t let them control us here in England. By that time I was just itching to get away from that bar side and find solace somewhere. Was this dude drunk or was he just speaking his mind? We can’t sugar-coat what people think and I know for a fact that there are many from our generation who have similar beliefs to the man I spoke to.
I would like to believe that there are more who want to put such caste issues behind us and be a Nepali first and foremost. The view back home could be different but for me living in UK where there’s so many people of different nationalities. I don’t want to be known for my sub-caste, I don’t want to be known as a Limbu. Most importantly, I want to be known as a Nepali. We, ethnic minorities already face a hard time establishing our national identity here and what the man’s voice echoed was just indigestible for me.
I had to go to that party. I am actually proud that a Chetry, Shrestha and Thapa were working together to pull of such an occasion. We ask of each other’s name followed almost instantly by ‘ani thar ke ho’. There’s nothing wrong with that except at times it reminds us of the negative stereotypes that have been passed on from the previous generations. What is on writing today was voiced by me when the interviewer of BFBS Gurkha Radio asked for my view concerning the mounting tendency of jatiya’ sansthas being formed in the UK. What’s more is have you noticed how hypocritical some of us can be, we take our freedom of speech too far at times by cussing yo jaat or tyo jaat but when it comes to treasures such as Anuradha Koirala and Prabal Gurung, it all fades away. It’s high time we show respect to one another for the person we are, be more civil and forget the negatives that our parents may have told us to hold on to.
Let’s be Nepali was my message and a movement that I wanted to create. Thankfully there’s always an army of enthusiasts on Facebook who are game for almost anything!  And so we did by opting to change our surname to Nepali. As expected various janne-battho’s had to give that input ‘Lex, a caste called Nepali already exists’. Well, Hello Mr Wikipedia! So does the caste Nepal. I am fully aware of that and won’t mind being known as a Nepali. O and to let you know, the response was amazing. In the beginning there was about ten of us and it just increased. Those that joined this mini-movement do not actually know the reason behind why I wanted us to be known as a Nepali but I’m sure the picture that I’ve painted today is clear to see.
Published on Asadh Issue of Navyaata Magazine

Lex Limbuhttps://lexlimbu.com
Lex Limbu is a non-resident Nepali blogger based in the UK. YouTube videos is where he started initially followed by blogging. Join him on Facebook and follow him on Twitter.
Previous articleUkrainian Pop Video Filmed in Nepal
Next articleFirst Ostrich Farm in Nepal