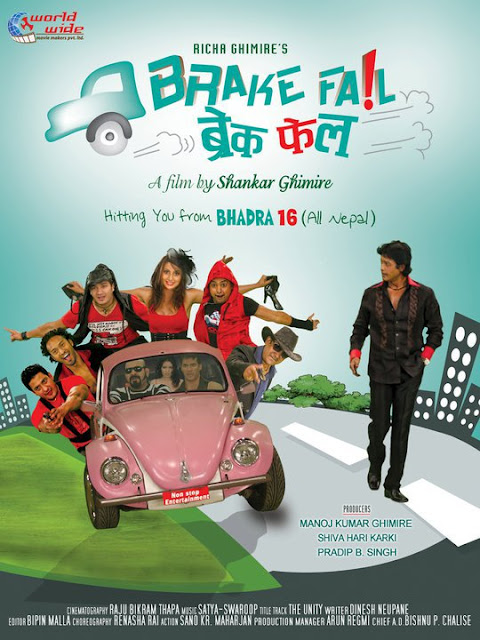 ”Darsak lai sochiyera nai banayeko philim ho yo” said director Shankar Ghimire to Kantipur TV host Suraj Singh Thakuri at the premiere of his movie Brakefail. The movie is very close to Ghimire as it is another one of his home production and has his wife Richa Ghimire’s name and face plastered across the poster. Aside from having Richa, Brakefail stars a host of actors from Rajesh Hamal (in a negative role) to Niraj Baral, Bimlesh Adhikari, Subash Thapa etc.


The movie is made well technically speaking. It’s doesn’t follow the traditional style of film making that one is so bored of seeing and the actors and actresses in the movie have all done a commendable job to their role. For me none of the characters stood out, no one was striking enough. Richa Ghimire after a long time is very well dressed in a movie and excels in dancing and acting (losing a few kilos of weight would make her ”hot”again). The script could have been more tightened… while I write this I am a bit lost regarding what really happened in the movie as there wasn’t anything memorable. Actor Subash Thapa plays the character of a homosexual journalist in the movie. It’s certainly a good way to introduce such variety of personalities and I particularly liked the movie in the second-half when the story is set in the Terai and we get to see Madhesi people and their culture. Director Ghimire has tried his best to bring new masala to an old story.


Brakefail which Richa described as a ‘situational comedy’ failed to deliver laughter to the dozens that had made their way into the halls. If you like Richa or want to like Richa then go for it.