An earthquake measuring 6.8 on richter scale has rocked Taplejung-Sikkim (India) border which was felt in Eastern parts of Nepal and also in the main capital Kathmandu and Pokhara. Five people in Nepal were killed whilst 44 other sustained injuries. Three were killed when a compound wall of the British Consulate fell over them at Kapurdhara Marga of Lainchour. Okay, I am shocked that the British Consulate could even locate in such area with such bad structure. Should it not be like the mammoth sized American Embassy?? 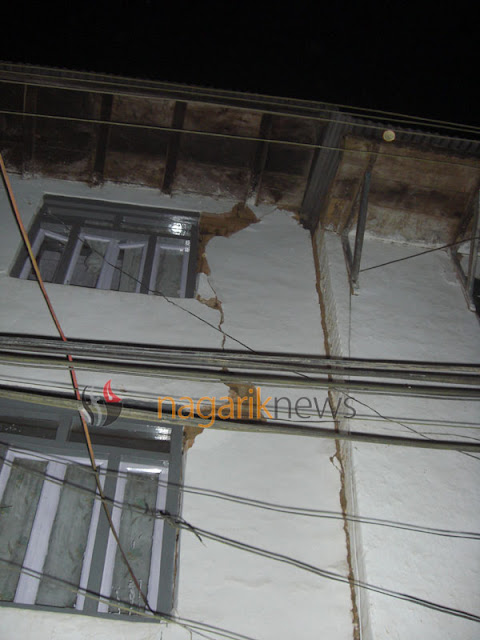 A building in Bhojpur, photo taken by Prawin Suwal. Photo courtesy of NagarikNews.

Reactions on Twitter:
Binod Gautam: Will Kathmandu sleep today? All people in the street. God save all people #sept18earthquake
Rabin Gurung: No damage at samakhusi area it seems.
Arjun: whole ktm is sooo noisy!!
Dinesh Wagle: I ducked under the table throught as I saw this building shaking and heard colleagues screaming out of fear. I thought death was close


Promise Tamang: Felt a big earthquake just a couple minutes ago…. I was freaking out trying to find where Steve was …what a traumatizing experience !


Some background info on the earthquake here!