Is Nepal Owned By CHINA?

Lex Limbu
November 3, 2011
Share
Facebook
Twitter
Pinterest
WhatsApp
Though I try to brush off claims by Tibetan friends that hold views that Nepal is rapidly has become China’s new toy I can’t help but feel that maybe they are correct after reading several articles, documentaries and having seen the treatment of Tibetans in Nepal for the past several years. All this has me wondering as to why our government is being so unjust to these group of people. After all, many of them are legal citizens in Nepal who like us have rights… and those that have made Nepal home as a refugee still have their rights which we should safeguard. I do not see such inhumane treatment being given to the larger Bhutanese refugees settled in Eastern Nepal.
Reporter Sraddha Thapa of Republica national daily shares similar thoughts as she writes:

We are a sovereign state and it puzzles my generation – who were taught to value democracy to witness our government deny the same to Tibetans in Nepal. Of course, there is too much at stake to openly challenge the One-China policy – even the global hegemony, the US hasn’t dared, but must that stop us from granting Tibetan-Nepalis the same rights as non-Tibetan Nepalis when on our own soil?

An embarassed Thapa writes this after viewing a recent Al Jazeera documentary suitably titled ‘Mustang: A Kingdom on the Edge’. Watch the 47 minute long documentary to find out the struggles of Tibetans living in Kathmandu and find out why ”Any gathering or Tibertans without government approval is now illegal”. Just absurd right? With growing Chinese interference in the China-Nepal border this raises questions as to why our giant neighboring nation is becoming so paranoid. The hidden Kingdom of Mustang is set to become not so hidden anymore as a road will intersect through the barren landscape leading it right into Tibet, that only means it will invite more Chinese into one of the last pure civilization and a place where traditional Tibetan culture is still practiced. 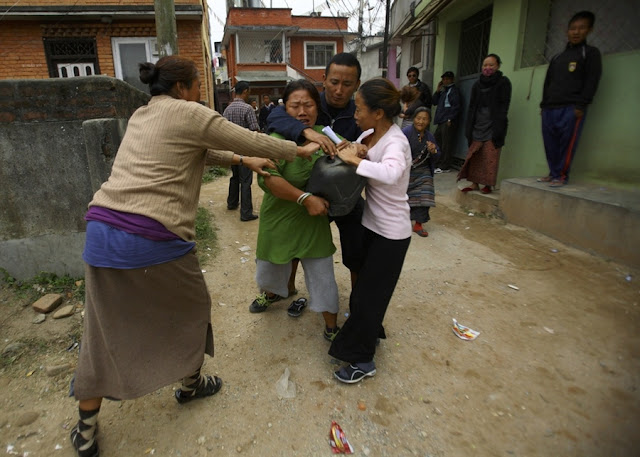 Images taken by Narvesh Chitrakar/Reuters has surfaced online where an ‘exiled’ Tibetan woman is photographed trying to set fire onto herself after an argument with a police personnel in Kathmandu on Tuesday. Furthermore, more than 50 Tibetan exiles were arrested on Tuesday in the city as they demonstrated in support of the nine Buddhist monks and a nun that have self-immolated since March in southwest China’s Sichuan province. Now I know that against such a big superpower Nepal cannot do much but really, is this not all a bit too much? I think it’s time that we Nepalis go out and protest in support of our Tibetan brothers and sisters.

Lex Limbuhttps://lexlimbu.com
Lex Limbu is a non-resident Nepali blogger based in the UK. YouTube videos is where he started initially followed by blogging. Join him on Facebook and follow him on Twitter.
Previous articleJPT Rockerz – Nepali Band in UK
Next articleGoosebumps – Halloween Party by WhatNext!