Home nepal Father Kills 3 Daughters
Facebook
Twitter
Pinterest
WhatsApp
Very very sad news.
35 year old Bhakta Bahadur Rumba has been arrested and driven to Hetauda where he is now being kept until further notice after it’s come to attention that he killed his three daughters aged 7, 10, and 13 by crushing them with stones. The horrific accident is believed to have taken place on Friday morning last week. Police believe that Rumba is mentally unstable, more to be clarified… it is said that the mother was away to attend a relative’s wedding. 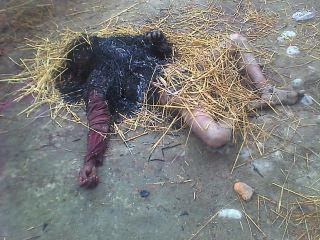 Another sad news here is the death of a 40 year old woman in Chitwan after she was accused of witchcraft and burned alive.

”Police arrested 10 people, including two shamans, five women and an 8-year-old boy, in connection with the burning.
“Those arrested have confessed to their crime and will be charged with murder,” Baral said.
Mahato had just finished cleaning a cowshed early in the morning when she was attacked, Baral said.
She was beaten with sticks and rocks before being doused with kerosene and set afire, an attack witnessed by her 9-year-old daughter, according to the local police report.
The government has announced 1 Million rupees in compensation for Mahato’s two children.”

Ke garne right? Even in urban places such as Chitwan, horrific atrocities such as this still take place. Education and awareness is needed not only online but more so offline, to areas where education is sparsely available. The educated are responsible to teach and share what they know to people who need guidance, who need to be taught what is acceptable and what isn’t in this modern day and age. Educated Nepalis need to consistently do a lot in Nepal so we bridge the gap between the rich and poor… the educated and the uneducated… it’s our responsibility. To those that already do such work, huge respect goes out to all.
Join Lex on Facebook!