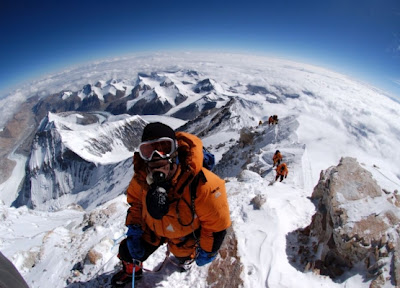 Now hoping to scale the Everest in an adventure of a lifetime is Prachanda’s son Prakash Dahal alongside a 11-member team consisting of several figures from the maoist group and even Prachanda’s former personal security guard on the 29th of March. Well I guess one has to take caution if in-case a yeti strikes! Jokes apart the serious matter here is why the Government has decided to provide Nrs 20 Million for the team.

This is a joke for much of the Nepali citizens, thank goodness our finance minister Ram Sharan Mahat feels the same way, he describes this decision as ”looting state coffers” and further argues by saying should the government provide such amount of money to every expeditions being carried out by Nepali teams?

The expedition is named Lumbini – Sagarmatha Peace Mission and I guess, it’s done as part of promotions for Visit Lumbini Year 2012. Hmm so fellow readers and passer-bys, if you could ask the government or the PM to better something in your chowk or community what would it be? How could this Nrs 20 Million be utilised better?

UPDATE: The Lumbini – Sagarmatha Peace Mission 2012 will not accept Nrs 20 Million funding from the Government following a wide-scale backlash. This was announced in a press meet organised on Sunday afternoon in Kathmandu. Good thing is that the mission will still go ahead! One of the points which a speaker makes at the conference was, why is no one bothered about what other political leaders sons and daughters are doing and why is there so much bias on Prakash Dahal.