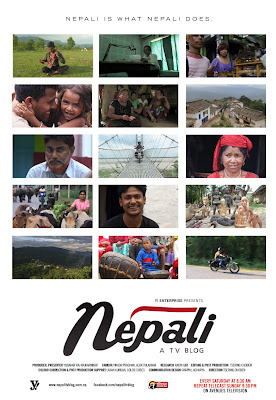 It’s only been few weeks, three weeks to be exact, since Nepali TV Blog had a broadcast of it’s very first episode on Avenues Television. You can catch it on Saturday morning at 8.30AM or catch the repeat on Sunday at 9.30PM. I hope the time slot is load-shedding free because Nepali TV Blog is definitely worth watching, here are few reasons why.


At a time when everyone’s fighting over what it means to be Nepali, this TV blog led by Yubakar Raj Rajkarnikar could not have come at a better time. If possible, I wish they could jumble this all together, make a movie and present it to our leaders and people who are so keen on dividing us up on the basis of our ethnicity. Though only three episodes has aired (I’ve watched all three), I’ve liked LOVED the TV blog since the very first episode. It is so much more than a biker, our main guide, Yubakar taking us from Mechi to Mahakali and asking people what it means to be a Nepali. This past three episodes have been so informative, I’ve learnt so much about different towns and cities of Nepal, how they were constructed, their history, to how people there live, their ways of making a living and what makes them a Nepali. Some groups, Tharu I believe, eat snails. Now that was very fascinating! I shall definitely search for that delicacy next time I hit Sauraha. Being informed about the Muslim population in Nepalgunj was aspiring. I don’t know if there will be a story, an episode, based on Janakpur but I can’t wait to watch it if there is. I am so fascinated about all these diverse ways of living, different religion and traditions which I hardly ever had a chance to learn.


Director Tsering Choden spoke with Republica newspaper few days ago, when asked how the response was, she did not describe it as an elating experience, “the response is trickling in”. Well readers, you know what to do and I know you do it the best. You guys make even the highest achiever feel shit and the normal person feel on top of the world with your comments, please I request you to watch the episode of Nepali TV Blog and give your honest view on the show. Do consider the types of TV shows there are out there at present on Nepali channels though.


I like the concept, the journey to discover the Nepali in us, however I wish the team had chosen a more excelling title for the show. Something that when heard, raises a question on people’s mind automatically. In addition to that, limiting the use of texts on the show maybe better or alternatively present the background information in a more attention-grabbing way. At time’s it may feel like a power-point slide springing up from nowhere. That’s it, that’s my constructive criticism.


Apart from that, this is not a nice attempt, it’s the best damn thing I’ve watched on Nepali Television so far!

Lex Limbuhttps://lexlimbu.com
Lex Limbu is a non-resident Nepali blogger based in the UK. YouTube videos is where he started initially followed by blogging. Join him on Facebook and follow him on Twitter.
Previous articleMISS U – Film Screening in London
Next articleWestar Apartments – On Sale