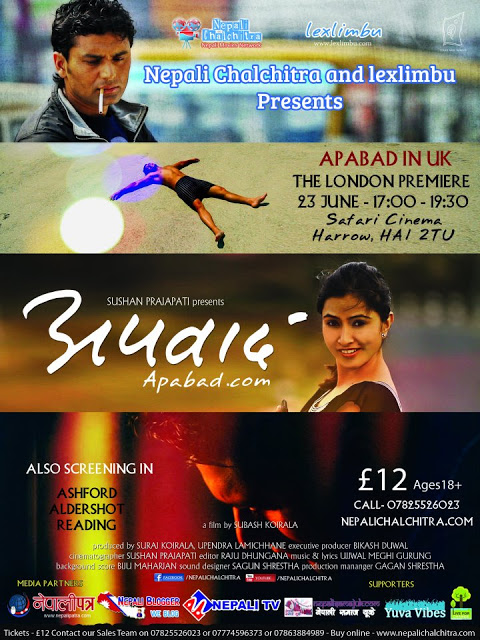 Our Nepali Cinema is definitely at a stage of transition. 2012 will undoubtedly be the year of diverse cinema; be it love, family, drama and action, all of the genres are covered. Here is ‘APABAD’, another film to watch out for which will soon be hitting theatres near you from the 23RD JUNE. The movie which has been directed by Subash Koirala stars two young actors who have been successful in creating a name for themselves in a short amount of time, Raj Ballav Koirala and Nisha Adhikari. Enough of the blabber, below is a short synopsis and if you like what you’re seeing and what you’re reading then join the UK screening of APABAD in London on the 23RD JUNE, followed by Folkestone on the 15TH JULY and Aldershot on the 20TH JULY. Furthermore, APABAD will be screened in several other towns and cities in the UK. Oh and everyone, I strongly request you to bring your parents or atleast encourage them to see this with their friends, an all out insightful film for the family! Don’t forget to bring your identification, above 18+ only.

This is a story of Suyog: Young and intelligent with his own set of ideals and beliefs. His perspective towards society and perception of the people around him are very individualistic. And he lives a dream hoping one day it gets fulfilled. But the wind blows against him, he tries to get up every time, only to be forced to the ground again. His hope fades away and the wind takes him over. What he does after that, how he finds his dream and happiness… is an exception!
Apabad is a measure of patience and persistence to achieve one’s goal in life. It is a question that we have asked ourselves in many crossroads of life and how one among us dared to stand for what he believes. It’s a story of an outlaw who puts a blindfold to pragmatism and walks in self-professed path of liberation and realization. 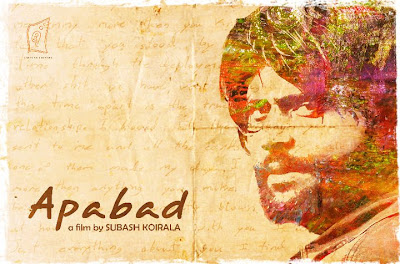 Purpose. What is ones “purpose” on this crazy world we all call home? For some it takes their whole life to figure it out and some never do.  I had it all figured out, I love to tell the stories and entertain people. As a film making student and being passionate about films I want to create distinctive mark on every film I make.Everyone lives in a different reality that is why people enjoy watching movies. It gives insight into the worlds of others. I as a Film director strive to portray their characters’ lives as believable as possible.APABAD is my first film as a director. I hope this will make a mark of myself as a true story teller and a film maker.

PS. Aapabad’s release date has been postponed in Nepal due to the current political scenario.

Lex Limbuhttps://lexlimbu.com
Lex Limbu is a non-resident Nepali blogger based in the UK. YouTube videos is where he started initially followed by blogging. Join him on Facebook and follow him on Twitter.
Previous articleRadio Nepal Dubstep Mix – LISTEN HERE
Next articleGurkha Cup 2012 – What’s Happening?