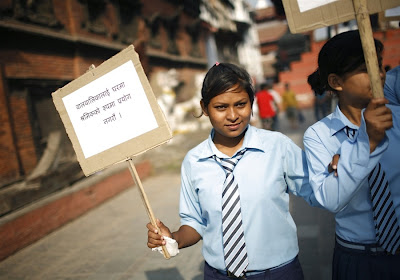 Apologies.
I am becoming one helluva lazy blogger! Moving on. Yesterday, June 12 was the World Day Against Child Labour. The purpose of the day is to raise awareness and activism to prevent child labour around the globe. According to a fresh report by The Himalayan Times there are approximately 1.5 Million child labourers currently in Nepal working in embroidery, brick kilns and as domestic helpers. About a decade ago the figure was a whopping 2.5 million. Though the number is declining Nepal still has a long way to go as six lakh children face the worst form of child labour (National Human Rights Commision). Raising awareness is great, teaching people about what is right and what is wrong should be practiced endlessly and the most important thing is for us to implement what we know. If you run businesses then avoid employing children and so on.