One Week Till APABAD in UK 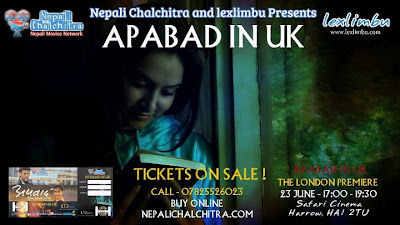 Nepali feature film APABAD was officially released all over Nepal on Friday 15th June. The first day collection of the film is said to have fared well in urban areas especially in Kathmandu whilst the smaller single-screen theatres are performing strictly average business. The hour and fifty minute long movie is based on the story of Suyog played by Raj Ballav Koirala who’s a confused unemployed student. I finally watched the film few days ago, I have also watched Into The Wild and Cast Away but I still found a liking for APABAD for the reason that the dialogues were very real and throughout the movie I found myself comparing me to the lead character. Obviously that’s a plus point. The conflict we have with our parents who want us to live by their ideals and follow their dream whilst we just seem to suffer silently. It shows my story, it shows my parents story – that’s the main reason why APABAD worked for me. Even technically, I was pleased with the movie.The sound track supported the film well, however it cannot be ignored that there are few loopholes in the film. But they are very minor and such loopholes are evident in other films too, Hollywood, Bollywood and Nepali cinema.


We’re only a week away from the very first screening of APABAD in the UK and what a difficult job it has been. Promotion has been going well, as one of the organiser/promoter/distributor for the UK – we have tapped all the potential media from TV/Radio/Online and street. However, that doesn’t necessarily guarantee attendance. I can understand why people think twice when encouraged to watch a Nepali film; the trend of going to see Nepali films just hasn’t set in. It’s challenging to sell the idea of ‘APABAD’ or any new Nepali film. People want to know who’s acting in it and even when they are told, they aren’t familiar with any of the names. It really does feel like a Catch-22 situation. Furthermore, a lot of Nepalis living in the UK have spent much of their years growing up in the UK which obviously means they arent as exposed to Nepali arts and entertainment which makes the task of bringing people even more impossible. LOOT was referred to as an ‘okay movie’ by some. I guess when you aren’t aware of the type of movies being produced traditionally then you won’t really see the changes being brought. And that is something I’d like for you all to keep in your minds whilst watching the ‘better’ made Nepali films.

When we go to watch Nepali films I believe we like to take on the role as a film critic rather than a film audience. By doing your best to pinpoint the faults and give a running commentary, you are guaranteed to not enjoy the film. Why do we not see such commentary on the recent spate of Bollywood films. Some that have been made in the recent years are plain stupid and absurd, unfortunately they are entertaining for many. Likewise, when sleazy Nepali trailer and photos of films surfaces online, every Tom Dick and Harry make it a point to share their view and comment on the “fall of Nepali cinema”, but hello – why don’t you show the same interest and enthusiast in the ‘better-made’ movies or atleast provide some constructive criticism and comments. By sharing your thoughts on the films you refer to as degrading Nepali cinema, you are only helping to promote it (had to say it).


As mentioned before, we are seven days away from the first screening of APABAD in London’s Safari Cinema (Harrow) on 23rd June Saturday from 5PM-7PM. If you are worried about the fall of Nepali cinema, enthusiastic about films and basically want a two-hours worth of meaningful movie then please do attend the screening. Your participation is highly required. Tickets are on sale and can be bought online or by a call.