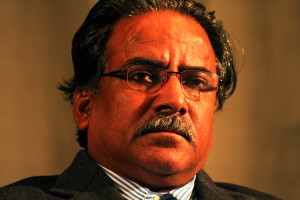 I am sure everyone has heard and read about the Prachanda slap by now. The incident was heavily discussed on various portals on Friday after Prachanda, one of Nepal’s most powerful figure was slapped by Padam Kunwar, a young activist believed to be a supporter of his own party. The scandalous act which has grabbed headlines took place in full public view at a tea-reception hosted by the 57-year old Maoist leader to mark the festivals of Tihar, Chhath and the Newari New Year. Twenty-five year old Padam Kunwar looked very much injured after being attacked by supporters of Prachanda. That was pretty much inevitable. The young man from Baglung has been hailed as a hero by thousands of supporters online.

In response to this scandal, the government has apparently formed a probe committee to investigate the incident. The three-member team have been given a weeks time to complete the task. The heads are convinced this was a preplanned attack put in place to conspire against the peace and the constitution process.

Honestly, a three-member probe committee? It was a slap, it happened. End of, man. Prachanda and his team should realise and investigate their very own actions to see why a young person would be so frustrated to commit such an action in such a public place.

PS. Prachanda, work on the change that your people want.

Lex Limbuhttps://lexlimbu.com
Lex Limbu is a non-resident Nepali blogger based in the UK. YouTube videos is where he started initially followed by blogging. Join him on Facebook and follow him on Twitter.
Previous articleNima Rumba & More To Perform in UK
Next articleLex in Nepal – A Year Later