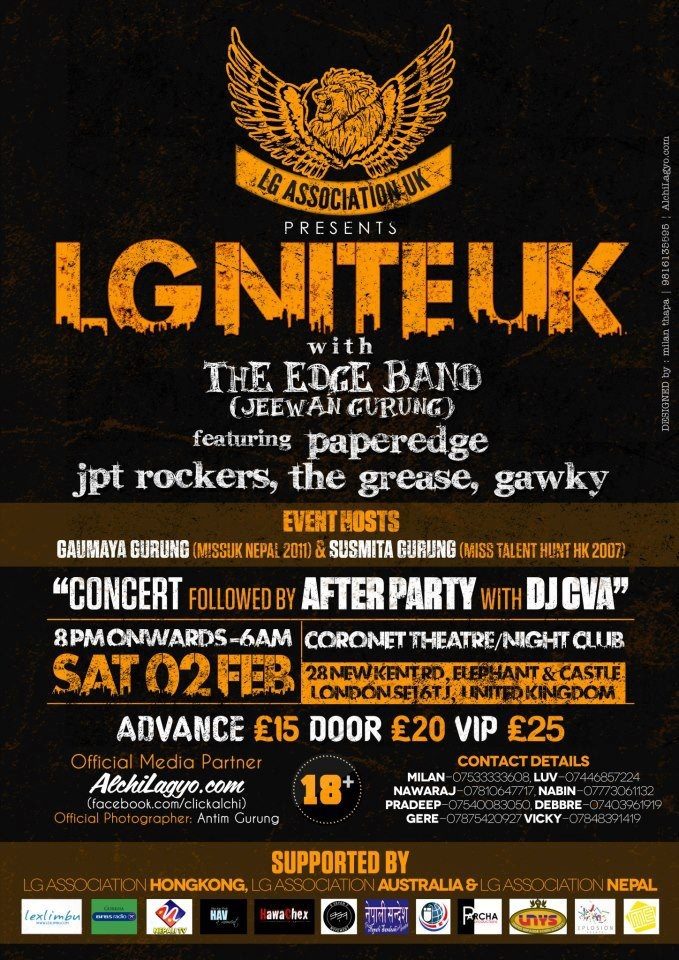 If you are fairly in touch with the happenings of Hong Kong and Australia then you’re bound to have come across the event organizers LG Association before. Having started in Hong Kong back in 2004, LGNITE has consistently brought over many big Nepali names to perform for the non-resident Nepali population. With the start of LG association in Australia few years ago, the group have already seen popular hip-hop band Nepsydaz perform in several cities down under. They have not forgotten motherland as they also recently held a concert with Nepathya in Pokhara. The LG Association operate on an annual basis, their 9th event will soon be taking place in Hong Kong.

Cutting to the chase, the group are all set to broaden their horizon this 2013 as they kick off the LG Association in the UK with a series of dates for the upcoming LGNITE UK! The headlining act will be the The Edge Band all the way from Nepal. Lead vocalist Jeewan Gurung from The Edge Band will be assisted by the Paper Edge band. LGNITE UK will also have UK’s own JPTROCKERZ, The Grease and the girl dance-group GAWKY! The evening will be hosted by two elegant ladies who have made quite a name for themselves in their respective field, former Miss UK Nepal 2011 Gaumaya Gurung and former Miss Talent Hunt Hong Kong 2007 Susmita Gurung. The London date will also have an afterparty with DJ CVA! Guess the evening doesn’t get better than that aye! #jampacked

UPDATE: Tickets for the LONDON show is officially sold out, please seek attend alternative dates or call the organizers up. (31/01/2013)

You can catch the show in:

Lex Limbuhttps://lexlimbu.com
Lex Limbu is a non-resident Nepali blogger based in the UK. YouTube videos is where he started initially followed by blogging. Join him on Facebook and follow him on Twitter.
Previous articleSanyukta Shrestha at The Fashion Museum!
Next articleNepali Apps