A prominent figure within the NepHop community, Manas Ghale also known as Loorey from Nepsydaz will be performing in London on Friday 16th August at the Electric Brixton. The event will be organized by the B13 Crew (B3RDTE3N). The popular band NEPSYDAZ created a wave amongst Nepali music listeners with the Chhudaina Remix followed by several other tracks including Maya O Maya and Timi Mero Mann Ma. Apart from being involved in Nepsydaz, Manas Ghale has also collaborated with a range of artists and also has his popular hit Yatri to his credit. Having performed for crowds in Hong Kong, Australia, India and mainland Europe, Manas shared that he is excited to be performing in London in August. Manas will undeniably give everyone a night to remember. Note the date down and book the following morning off as well, this is one night where you will definitely raise the roof off.

The gig which has also been dubbed the NEPHOP NIGHT will also have popular UK based Nepali rappers D-Boi Killah, Mastermind and Rapoholic. Sounds crazy! Imagine a duet between Rapoholic and Loorey on stage, that would be amazing! Once the live performance comes to an end there will be DJ BICKEY, DJ YAKOO, DJ SUJAN and DJ FLY on the deck till 6AM in the morning. Most importantly, the live performances will take place from 9PM till 12 midnight. So make sure you don’t miss that out.

As usual there’ll be things flying in the air! Music blasting from all sides because this is ELECTRIC BRIXTON! And you’ll probably be dancing in a sea of over 1000 people. So get your tickets now, advance tickets are priced at £20 and Group ticket for 5 is £80 only (saving some serious pounds there). 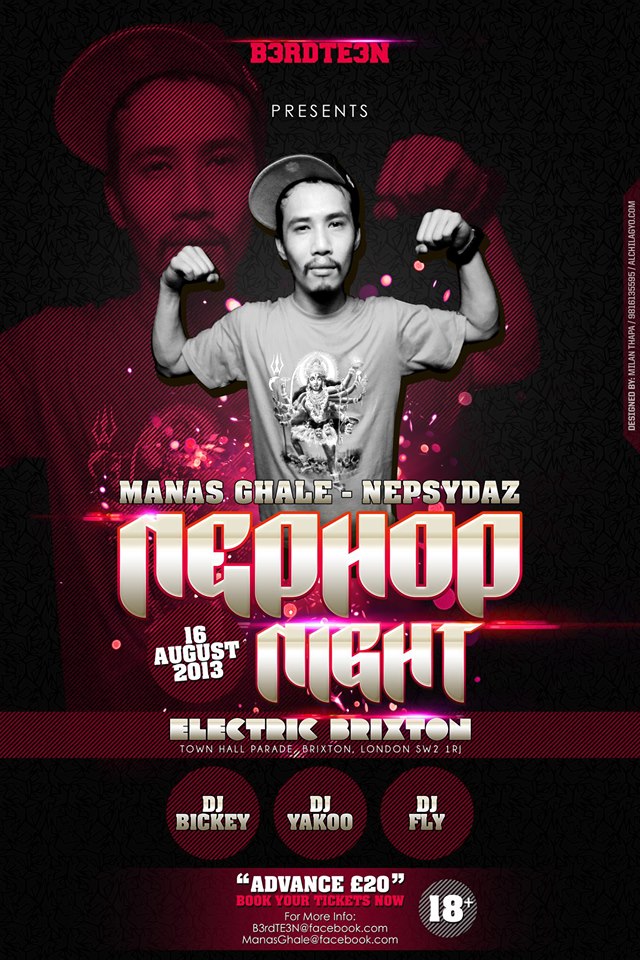 Lex Limbuhttps://lexlimbu.com
Lex Limbu is a non-resident Nepali blogger based in the UK. YouTube videos is where he started initially followed by blogging. Join him on Facebook and follow him on Twitter.
Previous articleParakhi – A Guide to Nepal
Next articleKathmandu Fun Valley Waterpark in Bhaktapur