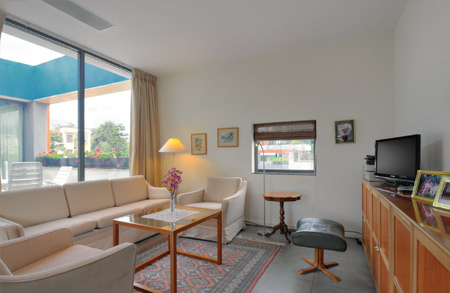 If you’re like me and have often wondered what the inside of embassies look like then you’ll be very happy to know that SPACES magazine recently did a feature on the Royal Norwegian Embassy of Nepal. The modern embassy consists of both the embassy as well as the ambassadors residence. Even though the building looks a little dead and oozes a military vibe from the outside, the inside looks fresh and very well planned. The open space feature is pretty cool, I definitely dig that.

The designing of the embassy included Norwegian consultants for the preliminary phase followed by local consultants in collaboration with Kristin Jarmund, a Norwegian architect who has designed various public buildings and stations in Norway. Nepal’s Sharma & Co was used for the construction of the building.

PS. If you want to read the full feature on SPACES, click here.

# Oh I have been to the Nepalese Embassy here in London… Yes the very embassy that keeps making news about whether its going to be sold or not. The VISA section which is basically down in the basement is nothing to talk about but the main building is GRAND! Lovely staircase, high ceilings, specific details but it is a bit spooky! The building is very old and gives off a very very eerie feeling.

Lex Limbuhttps://lexlimbu.com
Lex Limbu is a non-resident Nepali blogger based in the UK. YouTube videos is where he started initially followed by blogging. Join him on Facebook and follow him on Twitter.
Previous articleWWF Nepal With Simon de Trey-White
Next article“I am inspired by nature” Dhilung Kirat