Nepali Films in the UK 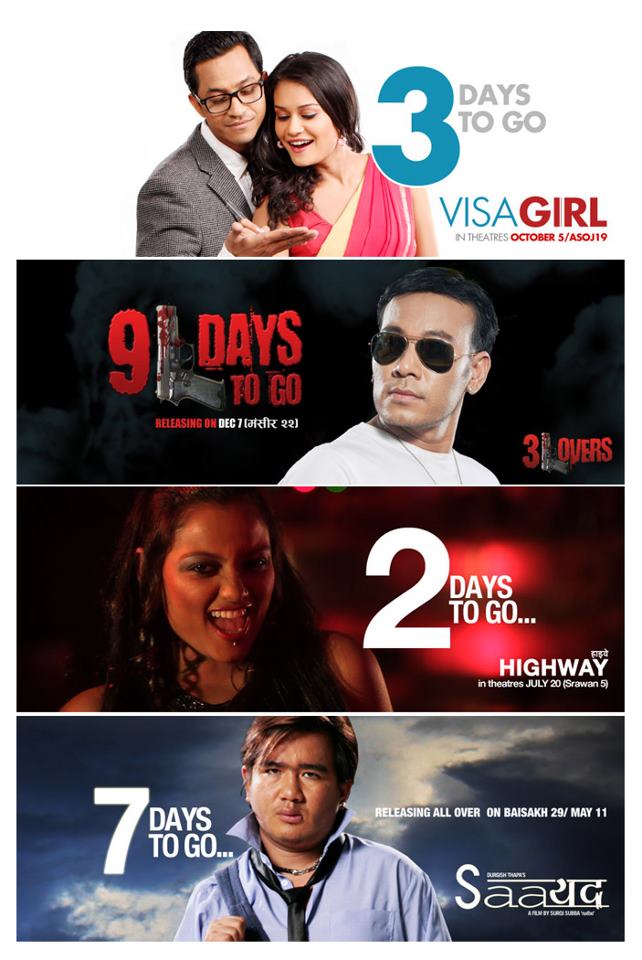 When people, especially those related to the Nepali film industry read or hear about Nepali film rights sold in the UK, USA, Australia and similar countries, I guess most filmmakers get the impression that the non-Nepal territory is a lucrative market. There has only been a rare few impressive shows where film enthusiasts and those that usually steer away from Nepali films have come together in hordes to catch the latest film. Unfortunately, majority of the screenings have fallen flat with much of the attendees comprising of invited guests, friends, family and far too little paying audience. The phenomenal success of LOOT managed to get everyone up on their feet. That was wonderful. Unfortunately, the optimism, hope and expectation that LOOT brought for the public was far too great for other filmmakers to meet. There have been several average films to surprise “HITS” since LOOT but nothing has come along that has managed to impress and attract the mass.
Post-LOOT, every Ram, Shyam and Hari has dabbled in screening Nepali films in the UK. A lot of the times I wonder why one even bothers when you actually sit down and think things through. Of course I too want good Nepali films to be showcased, to create that positive impression and erase those stereotypes that we have of Nepali films being simply about ‘gau-sahar’, ‘dhani-garib’ and another ‘college-stalker-turned-lover-affair’. However, I have to be honest here and suggest a better infrastructure for the screening of Nepali films abroad. The popular method of the present which involves the UK based organizer paying a one-off sum to the producer in Nepal can prove to be seriously unhealthy. Every filmmaker cannot expect his/her film to be a hit like LOOT; likewise every organizer should not expect that people will come just like that to “support Nepali films”. I am sure even the makers of LOOT were dumbfounded by the global success of the film. If you are the UK organizer paying Nrs 8 Lakhs or so for the UK rights and only manage to have few screenings that barely bring up to 100 people then you are publicly doomed. While you’re sitting down it is very important to map out where your screenings will take place. There are only a few places in the UK with quite a large Nepali population. There’s only one winner here and that is the person receiving that amount back in Nepal. Alternatively there is the less popular lower risk option where the organizer and the producer share earnings from each screening through an agreed percentage. This method not only requires both sides to be honest but also to have a high level of trust between the two different parties. Unsurprisingly, this method is quite unpopular.
We tend to forget how difficult it can be to lure someone to your event, make them pay £10 (or so) and have them leave with a positive experience. There are many with romantic imagination, maybe a little too many. It’s easy to sit and say “there’s 150,000 Nepalis in the UK, so let us bring aleast 5000”. We do not have the right things in place to be that ambitious here. In Nepal there are countless radio stations, TV channels, billboards and unlimited newspapers that have the capacity to promote films but here we’re dealing with the few weekly newspapers, one UK based Nepali TV channel, two radio stations and the general public to get the word out. Many screenings go unnoticed.
Promotion tools aside, even selling Nepali films to someone can be challenging. The old and young both tend to ask “Ko Cha? Rajesh Hamal, Karishma Manandhar haru?” and there you find yourself trying to remember the biography of this new hot-shot actor/actress. If I asked you to buy a CD of some new singer, would you buy it? I would definitely think twice and conduct my own youtube/google/wiki search before I hand over that £10 note.
I can’t blame people for being hesitant when buying tickets to see a Nepali film with unknown faces. I can’t blame people for not knowing the actors and actresses when we do not have the environment here where we keep seeing the faces on TV, newspapers and radio. I can’t blame parents for not urging their children to watch Nepali films when they themselves laugh at the idea of going and watching a Nepali film and that too proudly.
It’s challenging… then again, who said it was going to be easy. ‘Transition phase’, that is what I hope this period is. The last thing we need is to create and screen (or even link share on Facebook) some sleazy Nepali film that promotes nothing but sex sandwiched between love and crime. If you think it’s funny to share for the likes and comments you’ll receive then go ahead but please remember to share links and posters of well-made Nepali films too.
Finally, I am also one of the Ram, Shyam and Hari. Having been part of the LOOT, Apabad and Chhadke screenings in the UK, I want to thank everyone for watching the films and for many of you, for taking a risk.
Don’t forget to drop a comment below

Lex Limbuhttps://lexlimbu.com
Lex Limbu is a non-resident Nepali blogger based in the UK. YouTube videos is where he started initially followed by blogging. Join him on Facebook and follow him on Twitter.
Previous articleJharana Bajracharya on Wai Wai TV Advert
Next articleFormer Miss Nepal US Team Member Breaks Her Silence