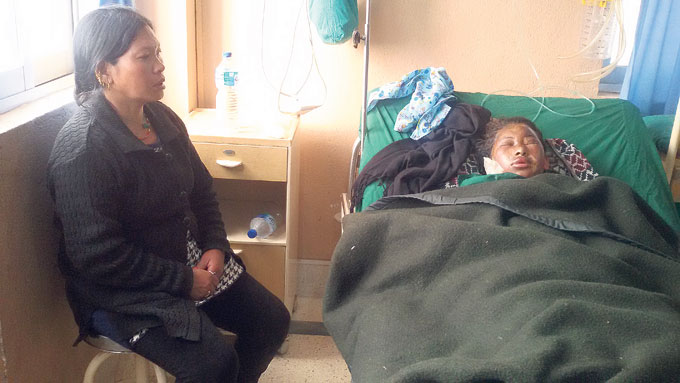 Do you know how depressing it can be to read the newspaper? When it’s not the headlines about the political parties consistently at loggerheads, it is stories of corruption and embezzled money that take the centre-fold. In the past few year’s reports of rape, sexual harassment and domestic violence has drastically increased. Over 440 cases of rape was reported in 2014 (tally of reports from the media) and though we’re only two months into 2015, 68 cases of rape have been reported already.

The recent acid attack on two school girls in Kathmandu on Sunday morning in Basantapur has outraged, angered and saddened people all over. The injured Sangita Magar, 16 and Sima Basnet, 15 were attacked by a stranger at a tuition centre in Jhochhen. The attacker fled the scene after hurling acid on the girls and apparently “police are zeroing in on the acid attack suspect” (Republica report). Protests have been carried out since yesterday morning by various groups and schools demanding urgent action by the police, strict punishment for the culprit and support for Sangita and Sima. With news floating around suggesting that the punishment for the guilty will be a measly fine of Nrs 2000 and four months in prison, this has further brought diverse groups of people together calling for tougher punishment.

Though this is not the first acid attack to take place in Nepal, the last thing we want is another form of violence against women occupying the space of the national dailies. It may be easy to point fingers at ‘external influences’ but now is the time to put pressure and act on correcting our own mistakes. The unimaginable has happened and what we can do is to make sure the concerned upper-bodies atleast hear our voices when we say the culprit should do his time for his crime! Sangita who has been affected by the attack the most is only 16, awaiting her final year examinations and has a long life ahead. It is disgusting to know that the person behind this attack could be walking away after only four months. Who knows? Slip a few thousand rupees on the side of the desk and maybe less than 48 hours.

This all sounds so ‘easy’. Probably like how the acid was also purchased. If this is how it will be, think of how many more might be affected in the days to come. “Kasai ko chhori lai esto nahuwosh” said Sangita’s mum with tears rolling down her face whilst I stood speechless, listening outside the KMC Hospital this afternoon.

It is even more gravely disturbing to hear some men say “girls these days have too much attitude and speak too much, maybe that is why this has happened”. That still is not a reason to throw acid on someone!

We always forget… and I worry that even in this case, after a few days, we’ll forget and our lives will move on, the culprit will do his minimum and move on whilst the scars on the girls bodies will remain to remind them every day of what happened that Sunday morning.

An online fundraiser page (created by me) has been set up to support the medical costs of Sangita who is still being treated at the KMC Hospital. Any support will be appreciated (if you cannot financially contribute, please share this post): gofundme.com/n4prc8

Lex Limbuhttps://lexlimbu.com
Lex Limbu is a non-resident Nepali blogger based in the UK. YouTube videos is where he started initially followed by blogging. Join him on Facebook and follow him on Twitter.
Previous articlePORSCHE Coming to Nepal??
Next articleAlok Nembang’s AJHAI PANI Premiere Photos!