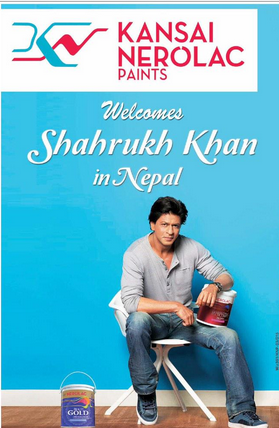 If the word on the street is to be believed then Bollywood superstar Shah Rukh Khan will touch-down in Kathmandu at 3PM tomorrow. King Khan who was apparently due to visit Kathmandu today for a Kansai Nerolac Paints event at the Hyatt Regency was affected by the Tribhuvan International Airport drama. The newspapers also ran an ad today saying “Welcome to Nepal”. It’d be interesting to see if he does come… I am not sure if he will since Nerolac Paints India and Shah Rukh Khan has not said anything via Twitter/Facebook.

Recently, there was a huge hoo-haa about Priyanka Chopra attending a launch event in Kathmandu for a company few weeks ago. I pretty much knew that wasn’t going to happen as her Twitter and Instagram showed that the actress was in Boston. There is no way you can fly from the USA to Nepal in 13 hours.