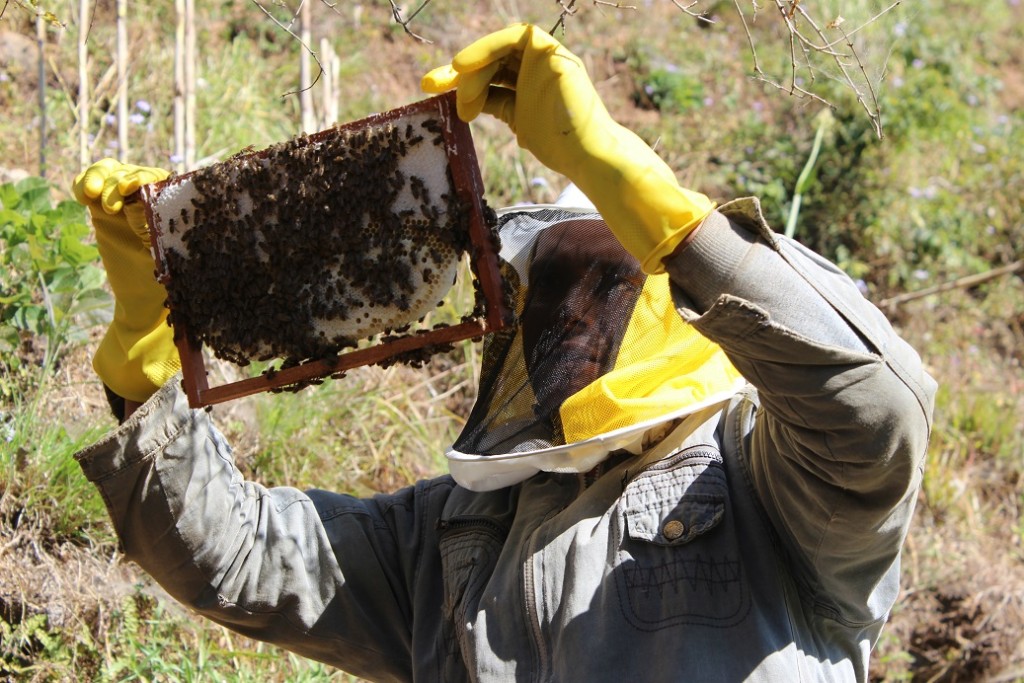 When Indra Dev Sharan Bhatt left his previous business venture and entered the world of bee-keeping a good twelve years ago, Bhatt never thought he would one day be able to earn a comfortable living from the business of bees and honey. The father of four who hails from Pipalkot in Kedar VDC of Baitadi has successfully managed to provide higher education to all of his children. Apart from knowing the ins and outs of the trade, the bee-keeper has also polished his skill in producing modern bee hives to be sold within the nearby community. With the income generated from the selling of bee-hives, bees and honey, Indra Dev easily makes up to half a million rupees (USD 5000) annually. With his sweet honey finding buyers in urban towns such as Dhangadhi and across the border in neighbouring India, the thriving honey farmer has his hands full with producing, selling and even providing training which normally takes him across different districts.

Bhatt is one of the 2,623 Micro Entrepreneurs who, through the support of Micro Enterprise Development Programme (MEDEP) are making a living out of bee-keeping and ancillary enterprises such as beehive making, supplying bee colonies, honey processing, trading honey and merchandise, tailoring goods required for the enterprise etc. in four districts of the Far Western Region – Darchula, Baitadi, Dadeldhura and Kailali.

Bhatt shared “MEDEP has given people like me a skill which has helped in transforming our lives completely. It has shown the immense potential to transform thousands of lives through bee-keeping in this oft marginalized Far Western region”.

The business of bees brings in working women such as Gaumati Nepali of Alital, Dadeldhura who is busy creating essentials such as gloves, hats and bags to be sold to the growing number of bee farmers across Alital. Gaumati who is supported by husband Karan Nepali in the tailoring business has sold over 1,200 sets in this season (August to December) and earned over Nrs. 120,000 from this business alone.

Having initially received the training from MEDEP eleven years ago, Gaumati also received a sewing machine. She adds, “The sewing machine has been symbolic in creating a newfound identity for me as it has given me independence, financial stability and empowered to take a more active role in the community.”

The booming enterprise has given much to Karna Bohara who operates Om Bee-hive factory in Alital-7. He has expanded his business so much that the number of employees in his factory has doubled to 8 since last year. He alone produces and sells about 200 beehives each month. With a growing number ready to be honey farmers, Karna’s modern bee-hives are flying off the shelves at Nrs 2500 (USD 25).

While Man Bahadur Giri of Alital -1 is struggling to keep his bee-keeping and bee-hive making enterprise flourish as he often remains busy training others in adjacent districts. He earns good amount by providing training while also extending market for the bee-hives and bee-colonies that his enterprise back home produces.

Alital bee-keeping entrepreneurs are agog about the prospect of their enterprise as they are successfully running in the second year of inspection for issuing an organic certification. They expect to receive such license by the end of 2015, if not earlier. Chyuri honey is organic by default as they grow in the wild – far from pesticides and fertilizer penetration. According to a Resource Analysis carried out by MEDEP in 2011, Far West alone has the capacity to produce 5095 MTs of honey annually and create jobs for thousands.

While Chyuri is transforming lives in the uphills, entrepreneurs in Terai districts are making fortunes out of vast mustard fields and other flowering plants in the wild.

Ganesh Bishta of Sukhad, Kailali is one successful bee-keeping Entrepreneur who remains always worried that the large potential of bee-keeping enterprise in the Far West is still untapped. He keeps 200 beehives which alone fetch him 2.5 million rupees per annum. He makes additional 1 million by processing and selling honey and providing training to others. According to him, honey produced by Nepali farmers is unable to meet the domestic demand while they also export honey to Indian market through informal channels.

Since beekeeping requires minimal start up investment and generally yields profits within the first year of operation, it is very suitable for poor and low income groups. This is also women friendly as Gaumati Bohara of Alital-1, Belbhadi puts it, “Bee-keeping is very appropriate for women as it can be started with low investment, yields immediate return doesn’t require heavy load carrying. We can take care of up to 20 beehives along with carrying out the household chores.”

Hailed as a sweet road to success, the business of honey has brought hopes and prosperity in the lives of many Nepalis living in the far west region. Moreover, honeybees create win-win situation between environment and income generation; they help maintain biodiversity by increasing pollination. 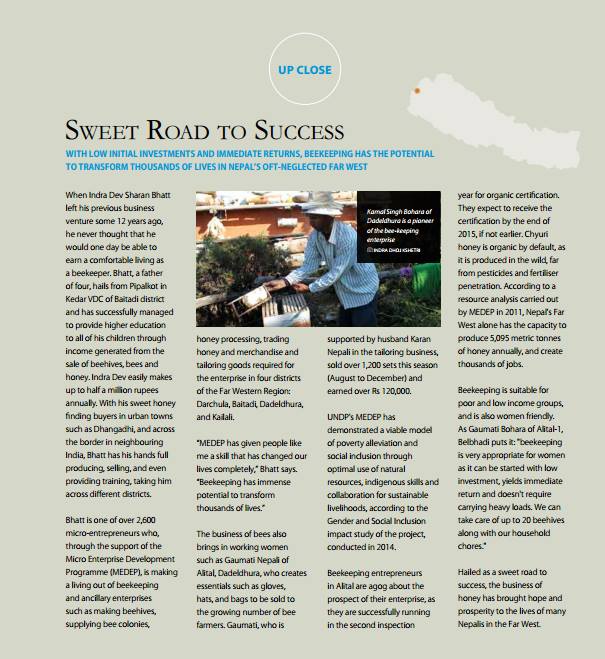 Lex Limbuhttps://lexlimbu.com
Lex Limbu is a non-resident Nepali blogger based in the UK. YouTube videos is where he started initially followed by blogging. Join him on Facebook and follow him on Twitter.
Previous articleBarahi Hotel Pokhara Announces 50% Discount!!
Next articleYeti Airlines Contributes Nrs 14 Lakhs