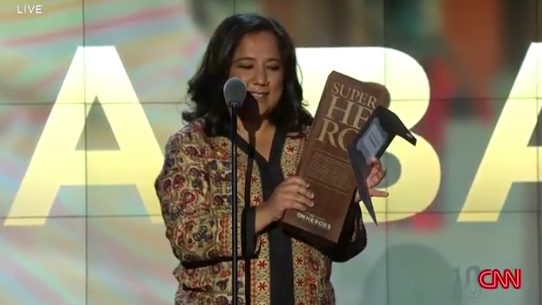 Huge congratulations to Pushpa Basnet for being the first CNN SUPERHERO! Basnet previously won the CNN HERO OF THE YEAR in 2012 for her work with inmate children and Early Childhood Development Center. As part of the 10 Years celebration of CNN HEROES, the initiative had shortlisted five CNN HEROES of the past and given the public the opportunity to vote for ONE SUPERHERO from the five CNN Heroes!

Basnet took home the title during a function in the USA on Sunday 11th December. Upon receiving the award from Anderson Cooper and Kelly Ripa, the super excited winner told the audience “girls can change the world”. CNN HERO will be supporting her with $50,000 for her to continue her work with Early Childhood Development Center.