To think there was a time when finding momos was difficult in London is pretty amusing. With many Nepalese cafes and restaurants now serving dishes in its authentic best, there has never been a better time than now to enjoy Nepalese food in London. A recent establishment by the name of MOMO & ROTI opened its doors in Hounslow. I simply could not refuse the offer to have some delicious food in this town of West London.

On first impression, MOMO & ROTI is an inviting open cafe restaurant that is for everyone. Whether you’re quickly dropping by for lunch during work or meeting friends after work for a spot of momo and drinks, the cafe is open from 11AM to 11PM. Now chatpatay is a snack (street food) that I simply cannot get enough of. Thankfully, the chatpatay I had here was right up near the tens if I had to rate it. The cafe aims to serve dishes from the North to the South of Nepal, hence Momo & Roti. With momo’s served in steam, kothay, jhol, tarayko to chilli – this place is literally a momo heaven. My friends and I managed to have chicken steam momo and chicken chilli momo. Both were amazing! I was slightly worried about the chicken chilli momo – I have found that certain places do not get it quite right. Of course, I say this as a self-confessed lover of food who really lacks skills in the kitchen (and life in general).

We also had chhoila, dahi papdi chat, chicken chilli curry, aloo paratha and butter naan. Trust me, it was a challenge to get home that evening. A special mention needs to go out to the Chef Dev Raj Dhakal who really worked wonders in creating these dishes. With rotis and curries being familiar in the diet of South Asians, it was no surprise to see non-Nepalese families also enjoying the food at Momo & Roti. Speaking to the owner, I learned that many non-Nepalese customers are enjoying the taste of momos! Momo’s are definitely one among the number of loved food items from Nepal and it’s no surprise that it’s a hot seller at Momo & Roti. It’s accessibility and affordability makes Momo & Roti appealing to visit but importantly, it’s the flavour that will have us returning for another round of momo’s and chatpatay very soon. 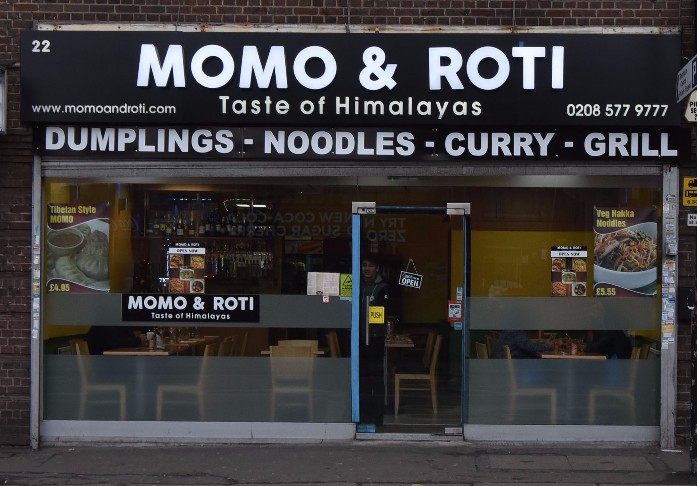 Disclosure: This is a promotional post written with the intent to promote Momo & Roti. #Sponsored #Ads

Lex Limbuhttps://lexlimbu.com
Lex Limbu is a non-resident Nepali blogger based in the UK. YouTube videos is where he started initially followed by blogging. Join him on Facebook and follow him on Twitter.
Previous articleMALE NUDE Art Exhibition By Kapil Mani Dixit And Roshan Mishra
Next articleAnjali Lama Alongside Kareena Kapoor Khan On AND Summer 18 Campaign