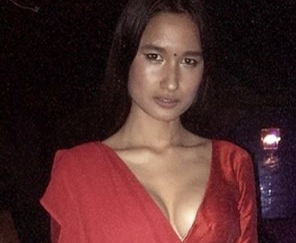 Though nearly a month has passed since the first ever live performance of Varsha Thapa and her band SITA VIRGIN at the Mercury Lounge in New York city – we get to live it vicariously through these YouTube videos by Sonam Ukyab. The first international Nepalese model donned a simple red saree taking inspiration from the Hindu Goddess Sita as she sang SITA VIRGIN originals and few covers alongside Rob Mastrianni and Katherine Haroldson. I loved it when she fused the Nepali and English together when she was singing! Impressive!

The gig was attended by friends and followers of Varsha including the designer Prabal Gurung and Jerusha Rai. Thapa’s band SITA VIRGIN will play at the Pianos NYC on June 13th from 10PM onwards. The evening will see the band perform alongside Juniore, The Crushing Violets and Riley & Howe! Tickets are only $8 USD and can be purchsed on TicketFly!

PS. Check out Varsha’s powerful interview as part of Models With Minds : 2018 series which I’ve shared at the bottom of this post. Totally share-worthy!