Is Nepal Ready for Gay Weddings? 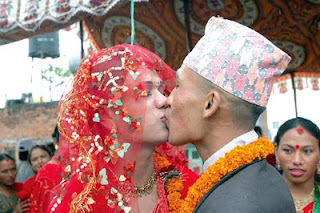 The country’s new constitution will legalise homosexual marriage in May this year, when “Pink Mountain” will begin offering luxury honeymoon and wedding packages.
Sunil Babu Pant, a Communist legislator and leader of the country’s homosexual rights movement, has launched a travel company dedicated to promoting the former Hindu kingdom to gay tourists in an effort to tap the so-called “Pink Pound” and dollar.
The company will offer elephant-back bridal processions, Everest base camp ceremonies and weddings in remote Tibetan enclaves in the Himalayan republic.
Mr Pant is hoping to build on the government’s new determination to maximise income from tourism by targeting all potential markets. The country’s tourism minister wrote a welcome statement for the International Conference on Gay and Lesbian Tourism in Boston last October, in which he said he believed Nepal will benefit from an increase in gay visitors.
Mr Pant has said if Nepal can attract ten per cent of the world’s gay tourists, its economy would receive a significant boost.
“Most Asian countries don’t welcome gay visitors, so we can have the maximum benefit for the Nepal economy which is fragile after years of war.
Anyone thinks its a bit too soon? Nepal may legalise this but I think Nepali people are still far too closed up about this issue. Plus, to make a destination GAY FRIENDLY, where are the Gay Bars, Clubs and Hotels? Is this merely done for economical benefits?

Lex Limbuhttps://lexlimbu.com
Lex Limbu is a non-resident Nepali blogger based in the UK. YouTube videos is where he started initially followed by blogging. Join him on Facebook and follow him on Twitter.
Previous articleMiss Nepal – The Language Issue
Next articleHoping For Haiti