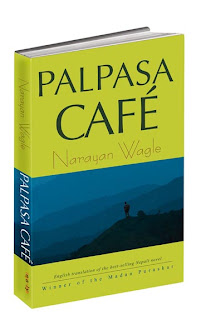 I had heard a lot of hype about this book. From people who read Nepali books to people who are more into western fiction; most of them had recommended me to read Palpasa Cafe. After buying an english version in Thamel at the Pilgrims Bookstore; I finally got round to reading it a few months ago. This book is simple, its a story which many Nepali’s will have in their heart or after reading this they’ll probably be very inspired or angered. I found the beginning sections of the book normal and nothing exciting however its only later towards the end that the book moves at a faster pace and it all ‘kicks off’. Thats what I thought anyway. So would I reccomend it to someone?
Yes, I would. This book portrays the trouble that the people of Nepal went through, the society the modernisation and everything along with it. Reading this I was further annoyed. Maoists – theyre such a problem. I dont get it. I just dont. When they were underground, they ruled and killed thousands – affected millions and stopped Nepal from developing aswell (destruction of roads, bridges, telecom towers etc). Still it shocks me and saddens me when I see so many Maoist supporters in Nepal. Even after the people gave them a chance in ruling the country, they could still not make any progress. Come on, I think we’ve seen more progress from NC then the maoists.
PRACHANDA AND HIS TEAM IS LIKE = BLEH!!

Lex Limbuhttps://lexlimbu.com
Lex Limbu is a non-resident Nepali blogger based in the UK. YouTube videos is where he started initially followed by blogging. Join him on Facebook and follow him on Twitter.
Previous articleThe Four Noble Truths
Next articleNepali Student Attacked in Australia