God Lives in the Himalayas to screen in Australia 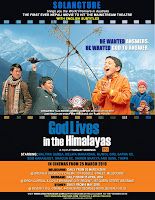 Sorry for the pixelated picture. After its premier at Goa, God Lives In the Himalayas will premier in various cities in Australia. The movie which stars popular names from Nepal such as Malvika Subba, Melina Manandhar and Dhiren Shakya etc is directed by Indian director Sanjay Srinivas.

The screening details are:

Lex Limbuhttps://lexlimbu.com
Lex Limbu is a non-resident Nepali blogger based in the UK. YouTube videos is where he started initially followed by blogging. Join him on Facebook and follow him on Twitter.
Previous articleKiran Joshi Brings Hollywood to Nepal
Next articlePushkar Shah’s New Adventure