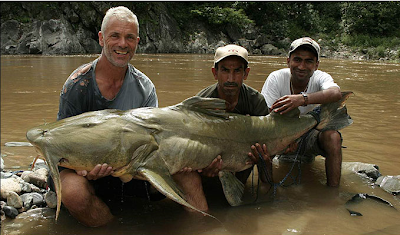 An 18-year-old Nepali disappeared in the river, dragged down by something described as like an “elongated pig”. But the first victim of a goonch attack was thought to have been a 17-year-old Nepalese boy.
He was killed in April 1988 as he cooled himself in the river.
Witnesses said he was suddenly pulled below the surface.
Locals have believed for years that a mysterious monster lurks in the water. But they think it has moved on from scavenging to snatching unwary bathers who venture into the Great Kali, which flows along the India-Nepal border. Jeremy Wade caught the mutant monster with a help from locals and this is the fish which is believed to have eaten the humans which have disappeared in the river.