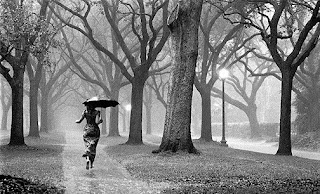 Whenever the heavens rained onto the earth my heart would burst with unspoken joy and I would long to capture the precious drops that fell on to the parched earth. But the face of the beautiful rain changed into a heartless stranger for me that day. The cruel raindrops fell harshly to the earth soaking me where I stood and it rained mercilessly on two other people whom I could see at a distance. He was lying in her arms, weak and frail. Her face was white as she ran her shaking hands through his hair. Their car now smashed against a tree was giving out small doses of smoke and there was blood and glass everywhere.
So much had happened. But as she looked at the silent road the flame of hope was dimming though she was not ready to accept it. I watched her anguished face as she tore a bit of her dress and tried to stem the flow of blood from the back of his head. His skin felt cold and clammy but she was not to know, as she herself was numb. She constantly kept caressing his hair, his bloody face now disfigured; crooning at him even though he wasn’t making a single sound. Tears were streaming down her cheeks and she looked at the road again in despair wondering where the ambulance was.
I knew he had bled to death but she was unaware. His eyes lay open and still as she kept talking to him. I stood far under the large oak tree on the other side of the road and watched. Coldness crept into my heart, which was thrumming erratically, and the tears wouldn’t stop. She wept silently now and she was close to fainting. It was still raining and she shivered but took off her wet cloak and covered him lovingly. I saw the cuts on her hands and legs and the blood in her dress but some how I knew she would survive even if he hadn’t. She had always been the stronger one. She looked towards the road again and screamed for help but there was no one around for miles.
She was too badly hurt to go find help herself. All around the raindrops danced and swam but she cried tears of blood. Suddenly she looked right at me and froze. Her gaze stilled, her breath slowed, her eyes furrowed in a familiar and endearing way. She stared but the tears never stopped. Could she see me? I wondered but we both knew that it was too late. Nothing could bring back the life taken away from that body and I cried for her. The pain in her eyes coursed through my veins and we just looked at each other through the thinning rain. I ached to hold her in my arms as I had done so many times before but I couldn’t move. I just stared at my lifeless body in her arms and cried for both of us. In the distance the siren of an approaching vehicle could be heard and she was still looking at me as the paramedics told her