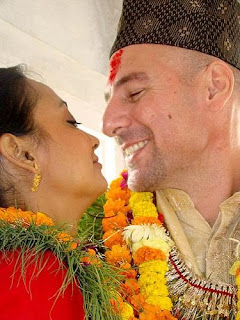 Hello Blog! It has been a while since I last wrote. K garney I feel like I can only write when I am in a certain zone and in front of a good computer. Silly I know but a quirk it is!

Prior to Ekchin with Sarah Gurung I would just like to write a little piece about inter-racial relationships and marriages. Some parents are even against the idea of inter-caste marriages, so inter-race marriages/relationships are a taboo to them.

The argument for getting ‘settled’ within your own race as I have heard it so far is numerous. For argument’s sake let us call the other ethnic person ‘gora’ because anyone who isn’t a Nepali is a apparently a gora. Things I have heard parents say are if you marry a gora they will leave you, convert you, kill you or eat you. Perhaps not ‘eat you’ but the way they go on about it, if you had never met another person from a different race you would be misled to believe that they are cannibals from Atlantis who prey on you, look down on you for being Nepali, then put you in black bin bags and then the bin men take you away in the wheelie bin.

But there is no proof to suggest that Nepali marriages or relationships run smoothly, contrary to parents propaganda, we all know of couples who are unhappy in their marriages, suffer discreetly and even hop from one relationship to another. But all this is over looked as parents try to push the benefits of being in a Nepali alliance.

The other argument they use is the culture one. If you go with a gora your Nepali culture is at risk. You will forget your values and beliefs and desert your parents and society. If an elder says this around me I always say, ‘what culture? What society!’ simply for the shock value. Then I suffer a tirade of verbal diarrhoea and wonder how one sentence could make a person respond with so much tyranny and absolute conviction.

Culture is a way of life. You preserve it by choice for yourself at your leisure. It should never tamper with your life or be a burden to it. If there are customs you uphold with no belief or benefit in them then it isn’t culture but a restriction. Agreed we are Nepali, have a unique culture, festivals, customs and so forth but integrating with another race or culture does not diminish our identity but it simply makes us more multi-cultural. Speaking of which it seems most parents have actually missed the boat on multi-cultural Britain; Oh the irony of it!

Like most societies we suffer imperfection but where little things can be sewn and mended the changes need to be made. What we need is tolerance and an open mind. We are so lacking in these attributes that as a society we indulge in playing hide and seek and keeping up appearances and worrying about what the neighbour or the friend will think. The neighbour my friend probably wouldn’t bat an eyelid if your lung collapsed and you died in the middle of the street! well a perverse neighbour wouldn’t!

Lately many people I know are indulging in relationships that are forbidden by parents and apparently frowned upon by hamro society. Love is colour blind so keep it that way!

Lex Limbuhttps://lexlimbu.com
Lex Limbu is a non-resident Nepali blogger based in the UK. YouTube videos is where he started initially followed by blogging. Join him on Facebook and follow him on Twitter.
Previous articleKohi Mero Collects Over 1 Crore 20 Lakhs!!
Next articleHari Bansha’s Son To Act