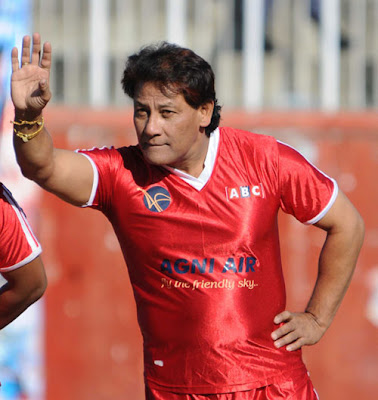 Shiva Shrestha is one of the few credible actors from our small film fraternity. Unlike many of his contemporaries he has’ steered clear from repeating himself in the roles given, however he is still one of the most popular actor that Nepal has seen so far. Truck Driver, Thuldai, Chino and Sagun are some of the movies that stand out from his filmography, aside from the movies of the past being of good content, Shiva Shrestha also benefitted from possibly the best music which still gets constantly played at Nepali events. ”Bataiisaille Udaii Layoo”, ”Aago Lagyo Dilaiima” and ”Suna Suna Sanam” are some of the hits where we have seen him shaking his legs. He’s also noted as a very ”chadkay” performer. It has been a while since we have last seen him in the Nepali silver screen and after Googling around for information and interviews of this classic hero I was shocked to find not much information available. So, YES I had to get in touch with Mr Shrestha and ask him of his current ventures, future plans and his glorious past. Enjoy the Ek Chin with Shiva Shrestha.
Firstly, you’ve been absent from the film industry for too long, what have you occupied your time with in the past few years?Well, it is not that I am completely absent from the film industry, some of my movies will be releasing soon. I believe in quality rather than quantity…When I am not doing movies, I am into social services and into Sai Baba. As you know I am a religious kind of person and a hard core devotee of Sai Baba.
What are the movies in the pipeline? Three of my movies are yet to be released. They are as follows.. ‘Raj’, ‘Badmash’ and ‘Sangam’.
Having been a prominent figure during the Golden Era of Nepali Films, how would you describe the journey of Nepali Cinema from then till now?Oh it has been a long journey of 29 years…I feel I am still learning more and theres lots to do, lots have changed since then. Before only 1or 2 films were made but nowadays around 70-80 movies are made. Some technical part of movies are getting better and equipments etc, but some parts have become worse as such no quality movies are made and before movies used to be shot in 35mm reel nowadays most use 16mm reel.

The on-screen kiss that you shared between Karishma Manandhar for Manakamana created headlines back in the day. Looking back on that, how do you recount the experience? Yeah! At that time the kiss scene was very much hyped about. It was according to the demand of the story thats why the scene was performed but nowadays those kind of scene is taken as a norm. People have the ability to digest more than that. 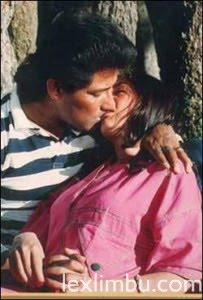 Rajesh Hamal, Shiva Shrestha and Bhuwan KC; three top hero’s of Nepal but who is the better actor out of the three?Well, it is not for me to judge such matters. Our viewers are there to decide and we all have given our best with our products.
Aside from acting, you’ve established yourself as an exceptional dancer, is this something that you learnt from a choreographer or a hidden talent of yours?Its a mixture of both 😉

Through the course of your film career what has been the most memorable incident?One of the most memorable moment was during the shoot of a Pakistani movie when we were in Bangkok. I had to jump from a helicopter into the sea and I wanted to do the stunt by myself. It was scary even to look down at the sea from such a height but I so wanted to do it in a perfect way that I jumped from such a height into the sea. That shot was taken so beautifully, after seeing the movie I was glad that I did that scene by myself and I still become thrilled remembering the excitement during that shoot though sometimes I think it was a dangerous stunt and one mistake could’ve meant disaster
Having worked in Urdu, Pakistani, Nepali Cinema and creating a name for yourself and earned the recognition that you deserve. Is there anything else that you wish to accomplish?One always wishes for more. I wish to act in Hollywood movies. When I just started my acting career I was offered a role in a Hollywood movie about 25 years back. I was too young to understand the importance of that opportunity at that time.

Who has been the most fun co-star to work with?All my co-stars were fabulous to work with…especially enjoyed working with Jal Shah, Karishma Manandhar and Niruta Singh.
Lastly, thank you for your time and any last words for lexlimbu.com readers?Thank you very much for inviting me for this interview I hope all of you had a wonderful Dashain and Deepawali. Hearty regards to the readers of lexlimbu.com, wish all of you prosperity, peace and good health.

Lex Limbuhttps://lexlimbu.com
Lex Limbu is a non-resident Nepali blogger based in the UK. YouTube videos is where he started initially followed by blogging. Join him on Facebook and follow him on Twitter.
Previous articleMaoists! Get LOST
Next articleSahana Bajracharya at Miss Earth!