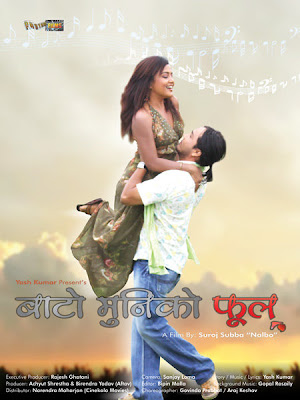 If you’ve been keeping up with Nepali movie guff-shuff then you will have found out by now that Bato Muni Ko Phool was one of the many new Nepali films which was caught in a piracy racket in Eastern Nepal just few weeks ago. Well, Bato Muni Ko Phool has unluckily found its way to YouTube and to thousands of viewers screen. This movie which was only released few months ago in Nepal did not fare well at the box-office and critics killed the movie with negative reviews. I myself did not expect much from this since the director was older and the movie just looked nice from the presentation.
However, do watch Bato Muni Ko Phool – its better to watch Nepali movies then not watch them. Even if thats online. I will make it a point to buy this movie once it comes out on DVD. The story is nothing new yet the presentation and story telling is nice; the film is very Nepali at heart and does not imitate any Korean movies or include lewd jokes of sexual reference such as Kusume Rumal – 2. I hope you got my little digs. I very much recommend you guys to see this movie and hear the song above.